People wear the suits and lift things while motion-capture sensors and an apparatus that measures muscle activation record how their bodies perform in the exosuit.

Renewables seen as way to stay in the energy business

There’s a push to draw a different kind of energy from old strip mines in Wise County — solar energy.

Bidding war raises the ante for small firm to $3.1 billion

‘Smart city’ touted as a bright idea for businesses

Gramercy District, adjacent to the future Ashburn Metro station, is expected to open next year.

SteelFab plans to add 18 jobs in Southern Virginia, thanks to a $2.1 million expansion now underway. 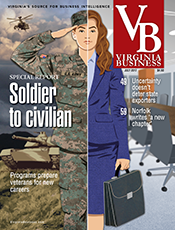