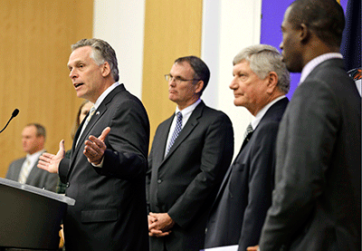 Expansion of Virginia’s $5.5 billion Medicaid program is shaping up to be one of the most contentious issues facing Gov.-elect Terry McAuliffe and the Virginia General Assembly.

It’s a new era in Virginia politics. Since the close of a bitter, divisive election, Gov.-elect Terry McAuliffe has been searching for common ground with his Republican counterparts.

Despite unhappiness with those elected to office, voters don’t have much choice when it comes to replacing them.

Payment data expected to offer a clearer picture of how health care is delivered.

Imagine the look on the faces of hotel guests when they saw penguins — the birds, not the hockey team — waddling around a New York Kimpton hotel. The penguins were traveling with Columbus Zoo staff who were appearing on one of the New York-based late-night television shows. Their presence in the hotel represents a growing trend: pet-friendly hotels.

Legislature must do justice by the state’s court system

Here’s a thought: Can a company sue the Virginia General Assembly for negligence?

Defense and security entities around the world know the name HDT Global.

Does milk do a body good? Breast milk certainly has helped babies at Children’s Hospital of The King’s Daughters (CHKD) in Norfolk.

After being in business for more than 25 years, Chuck and Robert Vailes had been through a number of economic slumps, but the Great Recession of 2007-09 was different.

AllergEase expects to hire as its retail sales rise

Entrepreneur Zeeshan Kaba found the idea for his current business venture in his pocket.

The provost of Purdue University has been selected from 238 candidates to become the next president of Virginia Tech on June 1.

A Supercharger station may not mean much to the average driver, but for owners of Tesla’s Model S electric sedan it can mean waiting minutes to charge their cars versus hours.

AOL co-founder Steve Case and his wife, Jean, didn’t set out to own a winery, but when the opportunity to purchase the former Sweely Estates presented itself in 2011, they couldn’t pass it up. 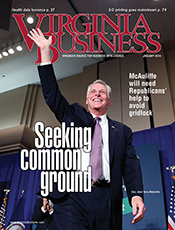