Richmond-based LuXout Stage Curtains s set to start in December on a more than $100,000 contract to produce 23 curtains for the John F. Kennedy Center for the Performing Arts in Washington, D.C.

An expensive piece of history

Steve Case puts Merrywood on the market for $49.5 million

Monogram Snacks in Martinsville has grown rapidly since its parent company, Monogram Foods, opened the plant in 2009.

The Roanoke region is working to attract and keep millennials

Industry experts say trend is a sign of a strengthening economy

For a variety of reasons, an increasing number of Virginia community banks have decided to combine. 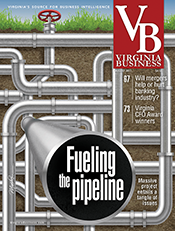