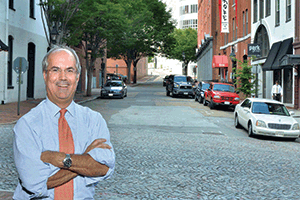 Mark Merhige marvels at how downtown Richmond has changed since the 1980s.

That’s when he and a group of investors including his father, a federal judge, bought an old warehouse in the Shockoe Slip neighborhood. They renovated the building, creating office space and some of the first loft apartments in the area.

The decision proved to be a harbinger of things to come.

Today, Shockoe Slip and the adjacent Shockoe Bottom — once dominated by historic but decaying warehouses and commercial structures that supported the tobacco industry — have blossomed into a trendy area of cobblestone streets, shops, restaurants, and commercial and residential properties.

“I’d love to tell you that I was a real estate genius and a visionary. But I have to tell you I was just a 26-year-old who was just thinking about chasing girls and having a cocktail,” says Merhige, co-founder and principal of

These days you’ll see a lot of 20-  and 30-year-olds in downtown.  Their arrival has helped produce a spike in Richmond’s population, according to new Census estimates.

The city’s population now tops 210,000. That’s nowhere near the 250,000 people the city had in 1970 before a steady migration to the suburbs during the next three decades.

Nonetheless, for the first time in recent memory, the city is growing at a faster rate than most of its suburban neighbors, including Chesterfield, Hanover, Powhatan and New Kent counties. (Henrico County’s growth rate was a bit higher, 2.6 percent compared with Richmond’s 2.3 percent.)

The surge in downtown has been led by Millennials, the generation that generally includes people born from the early 1980s to the early 2000s.

Changing the culture
John Accordino, director of the VCU Center for Urban & Regional Development (VCURD) in Richmond, says two-thirds of Richmond’s downtown’s population is in the 18-34 age group, compared with one-third in the city as a whole and a quarter in the metro area.

That critical mass of youth, he believes, is helping to change the city’s culture. For one thing, it’s becoming less car-centric. Among today’s youth, Accordino says, “the culture of driving has changed. Driving is a lot less hip and less desirable than it was a generation ago.”

Today, many young professionals are walking or bicycling to work, pouring out of the apartments that have sprouted throughout downtown and just south of the James River in the Old Manchester community.
Richmond will take big steps toward recognition as a bicycle community during the next two years.

Richmond will be the site of the USA Cycling Collegiate Road National Championships (May 2-4, 2014), and the next year (Sept. 19-27, 2015) it will host the UCI (Union Cycliste Internationale) Road World Championships.

Organizers say the World Championships could have an economic impact of $86 million in the Richmond area, drawing approximately 1,500 athletes and a worldwide TV audience of about 300 million.
With the help of the state, the city will be repaving many of its potholed streets to make the ride smooth for the legion of bicyclists who are on their way.
Accordino of VCU says the concentration of young professionals downtown presents Richmond with an opportunity for a fresh burst of creativity and innovation.  “We’re down the road in creating the city of the 21st century,” he says.
Accordino does not mind tooting the horn of his own institution, VCU, and its contribution to downtown Richmond’s youthful demographic. “In the last decade, VCU has grown by 9,000 students [to nearly 32,000], and VCU has invested $1.5 billion in the downtown in the last 15 years,” he says

2,400 new apartments
Since the beginning of 2012, more than 2,400 apartments have been built or are in the process of completion. During that same period, 750,000 square feet of commercial property has been completed or is under way.

Lucy Meade, director of marketing and development for Venture Richmond, a downtown leadership and booster group, says private and public investment in the projects total more than $1.15 billion.
She notes that downtown development forged ahead even during the recession. “It is incredible. We now have 14,000 people living downtown.”

Richmond’s experience with downtown growth is part of a pattern in many downtown areas across America, according to a Census Bureau report.

Among major U.S. cities, Chicago’s downtown showed the most growth in the 2000-10 period. The city’s downtown population surged by 36 percent. Washington, D.C., was second with a 14.2 percent increase.

Meade says one of the recent trends reported by developers is an influx of empty-nesters and unmarried singles in their 40s and 50s moving in from the suburbs to get away from cutting the grass and maintaining a home.

But Robin Miller, a developer involved in the creation of more than 600 residential units, says young professionals overwhelmingly have been the force driving the market for apartments in Richmond.

Their presence also has sparked a push in new restaurants and music venues. “It is all young professionals, 80 to 90 percent of it,” Miller says. “They’re kids who got out of college and have been living with three or four roommates, or in mom’s basement for a few years, and they want a place of their own.

“Unlike 20 years ago, when you came out of college you went anywhere the job was. Now, young professionals go to where they want the quality of life,” he says.

Miller believes the increasing presence of young professionals in the city bodes well for job creation from companies who want to locate where the talent is.

That was borne out in 2011 when Tumblr, a hot blogging platform recently acquired by Yahoo for $1.1 billion, located its first office outside of New York City in the Corrugated Box Building in Old Manchester.

Tumblr’s mobile app team and community support group already were in the area, so setting up an office in Richmond was a logical decision for the company. The Corrugated Box Building also offered the open, collaborative space favored by startups.

Tax credits led the way
In many ways, the origins of Richmond’s revitalization can be traced to 1996, when the Virginia General Assembly enacted legislation establishing a historic rehabilitation tax credit.

That tax credit, 25 percent, coupled with a federal historic rehabilitation tax credit of 20 percent, which had been enacted in 1976, made it financially feasible for many developers to renovate and adapt historic structures for new uses.

During the past 30 years, more than 1,100 projects in Richmond have employed historic tax credits.

The credits have been used to restore city landmarks, such as the Hotel John Marshall, now an upscale apartment building; and The National, a former movie theater that has become a destination for musical acts and a cultural anchor.

Elizabeth Tune, manager of the Office of Preservation Incentives in the Virginia Department of Historic Resources, says Richmond would “look different, hugely different” if historic tax credits were not available. Whole neighborhoods would still be blighted, she says.

Greg Wingfield, president and CEO of the Greater Richmond Partnership Inc., says there are many success stories in attracting major employers to the region.

In 2006, for example, packaging giant MeadWestvaco moved its corporate headquarters to downtown Richmond, near the James River.

In 2012, online giant Amazon opened two distribution centers, one in Chesterfield County and one in nearby Dinwiddie County. The two centers employ 2,000 people, and a few months ago Amazon said it would be increasing the inventory capacity at the Chesterfield plant. Hundreds of more jobs are on the way. The company said in August it will add 5,000 full-time jobs at its U.S. distribution centers.

The biggest homegrown success story in recent years has been Health Diagnostic Laboratory, which was started in 2008 with a handful of employees. The company, which provides medical diagnostic testing and patient counseling, has grown its workforce to 660 in the city’s Virginia BioTechnology Park. The company anticipates having 1,000 employees by next year.

“They’re in a great niche market in health care,” Wingfield said, “and in a great location, adjacent to a teaching hospital [VCU Medical Center] in a biotechnology park.”

The skyline of Richmond will soon be changing again, with the construction of a signature office tower —  the 15-story, $110 million Gateway Plaza — rising out of the heart of the business district, at the north end of the Manchester Bridge.

The tower will include more than 10,000 square feet of first-floor retail space and 520 parking spaces. The anchor tenant will be McGuireWoods LLP and McGuireWoods Consulting LLC. Richmond City Council has approved a plan to put more than $14 million in city financing into the project.

Museum is big attraction
Richmond has scored a couple of major coups recently that bolster the reputation of its quality of life: Outside Magazine, for example, named Richmond the Best River Town in America last year, and the Washington Red­­­skins football team moved its training camp to the city this summer.

But the polestar for quality of life and culture in Richmond is the recently renovated Virginia Museum of Fine Arts.

During the past decade, the museum has reinvented itself in ways large and small, ranging from a major expansion to Friday night wine tastings and salsa dancing.

In 2010, the Virginia Museum completed a four-year $150 million expansion, which added 165,000 square feet to the museum’s existing 380,000 square feet. Since then, its annual attendance has boomed, making the museum a major attraction in the region.

The museum is open 365 days year and is free to the public except for special exhibitions. “We’re averaging 550,000 visitors a year,” says museum director Alex Nyerges.

To better accommodate the flood of visitors, the museum will rehabilitate by 2015 a 163-year-old former farmhouse on its campus for a regional tourism site.

That’s also the year that Virginia Commonwealth University’s $35 million Institute for Contemporary Art is set to open on one of the city’s gateways.  “It will be a wonderful complement to what we do,” Nyerges says.