In his proposed budget amendments released Thursday, Virginia Gov. Glenn Youngkin lays out the framework and a timeline for the merger of Eastern Virginia Medical School and Old Dominion University, requiring it to take place by July 2024.

Youngkin’s proposal instructs the two institutions to produce the following deliverables to Youngkin and the chairs of the House Appropriations and Senate Finance and Appropriations Committees by Aug. 31, 2023: 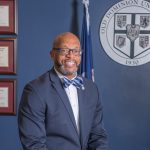 When those are approved, EVMS and ODU “shall complete a merger to create the Eastern Virginia Health and Sciences Center at Old Dominion University at the earliest date possible, but no later than July 1, 2024.”

In a message addressed to the EVMS community and posted Thursday to a joint website, ODU President Brian Hemphill and Dr. Alfred Abuhamad, EVMS’s president, provost and dean of the School of Medicine, called the proposal in Youngkin’s budget amendments “a very positive step for both institutions and our communities.”

The joint message also says “with the commonwealth of Virginia’s support, as well as Sentara Healthcare’s partnership, the integration will result in our region becoming a medical and scientific hub that attracts research funding and generates high-paying jobs.”

In July, questions of a potential merger arose after ODU hired Dr. Alicia Monroe as chief integration officer and senior adviser to President Brian O. Hemphill. At the time, ODU said she would help establish a health sciences center in partnership with EVMS and Sentara Healthcare. It was the same month Hemphill sent a letter to ODU’s faculty and staff “to develop a comprehensive plan to integrate ODU and EVMS in 2023,” while also noting that “a formal agreement has not been reached as this merger is contingent upon the work of the functional teams, as well as securing additional resources to support this expanded effort.”

Then, in an August interview with Virginia Business, Aubrey Layne, Sentara’s executive vice president of governance and external affairs, said that he, and ODU and EVMS officials had met with Youngkin in August about the planned merger, which had previously been rejected by earlier leadership, including EVMS’ former president, Dr. Richard Homan, who retired in August 2021.

In November, the ONE School of Public Health, a joint venture between ODU, EVMS and Norfolk State University, hired its inaugural dean, Li-Wu Chen. ODU, NSU and EVMS signed a memorandum of understanding to establish the school in 2021, aiming for it to address regional public health needs and inequalities. The General Assembly and former Gov. Ralph Northam allocated $5 million to the project, splitting the amount evenly between ODU and NSU. Sentara Healthcare provided $4 million in grants to ODU and NSU to support the accreditation process. At the time, Abuhamad called Chen’s selection “an important next step in an exciting and necessary effort to expand the local health care workforce pipeline and create a healthier future for the communities we proudly serve.”

EVMS and ODU have other ties in partnership with Sentara, which has invested millions in regional health initiatives, including $2 million each to ODU, EVMS and NSU to support the development of the public health school, as well as $3 million spread among ODU, EVMS and NSU for public health and health equity initiatives. Also, in May, Sentara established two new collaborative grants at ODU, EVMS and NSU to spur collaboration among the three institutions, along with Children’s Hospital of The King’s Daughters, in decreasing health disparities in underserved local communities. 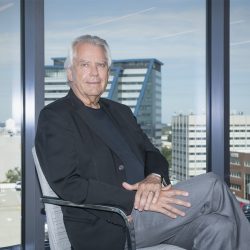 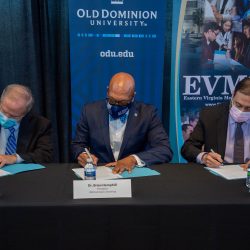 Hemphill cites 'plan to integrate ODU and EVMS in 2023'