Combined firm will be state's fifth-largest

Woods Rogers PLC and Vandeventer Black LLP announced Wednesday that the two law firms have agreed to merge as Woods Rogers Vandeventer Black, creating the state’s fifth-largest firm, with more than 130 attorneys and a total workforce of 250 people. The merger will go into effect July 1.

Daniel Summerlin, president of Roanoke-based Woods Rogers, will remain president of the combined firm, which will continue to be headquartered in Roanoke. Woods Rogers Chair Victor Cardwell, who is also president of the Virginia Bar Association, will serve as chair of the new firm’s board. Vandeventer Black Managing Partner Michael L. Sterling plans to step back from managerial duties at the time of the merger.

“This is something that we’re very excited about,” Summerlin said Wednesday afternoon. “We think it’s a historic merger that is going to create a powerhouse Virginia law firm. Woods Rogers and Vandeventer Black … have been around for 120-some years. When we got together and started talking to each other, we found we shared a lot of commonality in terms of practice of law, client services [and] the commitment to the bar, as well as a commitment to our communities in which we’ve been for such a long time.”

Woods Rogers Vandeventer Black will have offices in Roanoke, Norfolk, Richmond, Lynchburg and Charlottesville, as well as locations in Kitty Hawk, North Carolina, and Hamburg, Germany. Attorneys are admitted to practice in 20 states and federal courts, and the new firm will serve local, national and international clients.

“This is not online dating,” Cardwell said, speaking of how well the two firms’ attorneys and leaders knew each other.

The rest of the combined firm’s board will be elected soon and will include a managing member of Vandeventer Black’s Norfolk office.

Merger discussions started more than two years ago, just before the COVID-19 pandemic, Sterling said, although he noted that Vandeventer Black has been eyeing expanding its presence to the western part of the state, where the Norfolk firm has had clients for some time. “I gave Dan a call — and this is a few years ago — and I said, ‘We need to start talking to each other and just see if there’s a potential opportunity to come together,'” Sterling recalled. Gradually, the discussion became more formal and included the two firms’ boards, practice leaders and attorneys.

“I think we both have a common philosophy, which was ‘people first,’ then … clients and then … finances,” Sterling said. “Because we knew if the people couldn’t fit together … [then] it doesn’t matter if the finances look good or not.”

By combining forces, the firm will be able to strengthen practice areas such as commercial real estate — already a specialty for both firms — and cybersecurity, offering a deeper bench of expert attorneys, Summerlin said. He noted that Vandeventer Black’s government contracting practice is stronger than that of Woods Rogers, while the Roanoke firm has more strength in labor law, particularly relevant as more businesses are seeing employees moving to organize.

By having offices in more areas of Virginia, ranging from the Blue Ridge Mountains to the Norfolk harbor, the new firm also hopes to offer an array of lifestyle options to attract young new attorneys, who are in high demand in today’s tight hiring market. “We are now the place that people need to look at — from Richmond to Charlottesville, to Lynchburg to Roanoke,” Cardwell said.

As of Jan. 1, Woods Rogers was the state’s seventh-largest firm, with 77 attorneys in Virginia, and Vandeventer Black was tied for 12th largest, with 51 attorneys practicing in the state. The merger will place the new firm in the state’s upper echelons, just below McGuireWoods, Hunton Andrews Kurth, Williams Mullen and Troutman Pepper Hamilton Sanders.

The two firms combined have had 10 lawyers who served as VBA president, including Cardwell, who took the baton earlier this year from Richard Ottinger of Vandeventer Black. Cardwell noted that the merger has resulted in the Virginia Bar Association having two presidents in a row from the same law firm for what may be the first time in its 134-year history.

The two firms also are among the state’s oldest: Vandeventer Black was founded in 1883 and Woods Rogers was established in 1893. 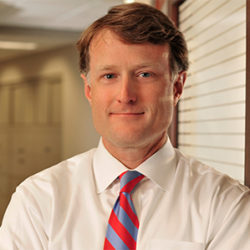