Fifty years ago, Virginia had 14 women’s colleges. Since then, two have closed and nine are now coed.

Virginia’s three women’s colleges — Hollins University, Mary Baldwin College and Sweet Briar College — have faced financial and enrollment challenges that might have led other schools to follow the coed trend.

These three schools, however, have held to their conviction that, as women’s colleges, they can offer a better education and more supportive environment to female students at a time when women increasingly are achieving leadership roles in business and world affairs.

HOLLINS UNIVERSITY
In 2001, Hollins University in Roanoke began pondering the enrollment of undergraduate men. Enrollment was slipping, and in 2000 applications fell to their lowest point in seven years.

The university had been dipping into its endowment to meet its obligations.

By mid-2001, the president had resigned, citing philosophical differences.

However, Stefanie Niles, Hollins’ vice president of enrollment, says the academic profile of students is improving, a development which helps retention, and the freshman class is growing. This fall 148 traditional-age freshmen showed up, compared with 128 last year.

Niles says the university’s biggest challenges are families’ concerns about the cost of college — worries that have intensified since the recession — and the demographics of its enrollment pool, which shrinks as the number of high school graduates decline.

“We draw less than half our students from Virginia,” Niles says, and the decreasing number of prospective students nationally impacts recruiting.

Whatever challenges lie ahead, Nancy Oliver Gray, who was named Hollins president in 2005, says the university’s board of trustees has reaffirmed the university’s commitment to women’s education.

“We’re in a very competitive time in America, and it’s simplistic to think that just admitting men is going to solve the problems,” Gray says.

The Hollins president has her finger on the financial pulse of the university, and her accomplishments include operating with balanced budgets for the past six years and eliminating the college’s debt.

She also led a fundraising effort that concluded in 2010 with $161 million, well over its $125 million goal.

Gray says her administration has taken notice of the national conversation about the value of a college education.

“We’ve become more intentional linking training in a liberal arts education to the world of work, and we’ve made investments in our career center,” she says.

In addition, the Hollins president says the university has mobilized its alumnae to leverage internships and career counseling.

Before her arrival at Hollins, Gray served more than five years as president of another women’s school, Converse College in Spartanburg, S.C.

Gray notes that Converse cut its tuition by 43 percent in September to make the institution more affordable.

University officials say that, on average, students graduate within four years, instead of the five to six years that is the norm at many institutions.

That, the college says, can trim thousands off the cost of a college education. 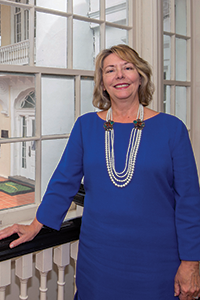 Mary Baldwin College, which has the smallest endowment ($36 million) of Virginia’s three women’s colleges, has used what it calls “entrepreneurial courage” not only to stay afloat, but to thrive.

The college has seen record enrollment for three straight years, but it had to play a variety of cards to achieve a winning hand.

The current breakdown shows its strategy: 753 undergraduates in the Residential College for Women; 692 adult-degree program students; and 229 graduate students. (The figures vary from previous years because the college now uses Integrated Postsecondary Education Data System standards to differentiate between full-time and part-time students.)

In 1977, Mary Baldwin became the first institution in Virginia to initiate an adult degree program, aimed first only at adult women who wanted to earn a college degree but later expanded to men. It now has 10 regional locations, serving women and men, as well as its home campus in Staunton offering undergraduate and graduate degrees.

In the mid-1980s, the college established its Program for the Exceptionally Gifted (PEG), offering college courses to academically gifted girls ages 13 to 15. About 70 girls are now enrolled in the program in Staunton.

In 1995, as Virginia Military Institute attempted to remain all male in the face of a mounting legal challenge, the Virginia Women’s Institute for Leadership, the nation’s only all-female cadet corps, was established on campus.

In 2001, what is now the American Shakespeare Center opened the Blackfriars Playhouse in Staunton. Mary Baldwin quickly created a master of letters/master of fine arts program in Shakespeare and performance, which draws more than 50 students from around the world.

Most recently, the college created the Murphy Deming College of Health Sciences, which generated the largest gift ($15 million) in Mary Baldwin’s history.

The health sciences school, being built in Augusta County’s Fishersville area, will be part of a rapidly developing health corridor. It will offer doctoral degrees in physical therapy and occupational therapy and master’s programs in physician assistant studies.

Shelley Rubiani, a 30-year-old senior from Puerto Rico majoring in studio arts and communications, says the camaraderie of the Mary Baldwin community is special.

She said a frequent question from freshmen — who may still have doubts about what a women’s college is all about — is this: “Do you have fun here?”

Rubiani laughs. “I say, ‘Yeah!’ We do the same thing that they do at other colleges.”

Rubiani and Abagail Ramey, a student from Virginia Beach, say they have become much more confident about themselves and their abilities because they’ve had opportunities for leadership, as well as encouragement from peers and professors to step out of their comfort zones.

Ramey cites one of the college’s slogans: “When they say ‘boldly Baldwin women,’ they mean it.”

Mary Baldwin also has been laser-focused on trying to keep costs in check.

In February, the college’s board of trustees passed a 2.5 percent tuition rate increase for the Residential College for Women, the lowest increase in more than a decade, indicating what the college says was “a desire to keep the cost of a Mary Baldwin education within the grasp of working families.” 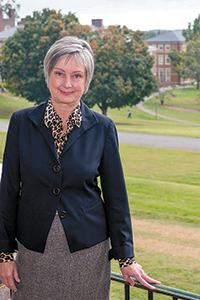 “We are making some progress. But we’re not making as much progress as we had hoped on enrollment.”

Under its five-year “Plan for Sustainable Excellence,” now in its third year, Sweet Briar has a goal of 675-700 undergraduates in residence.

Adult students, students with nearby families and upper-class students living off campus, would boost enrollment to 750-800 degree-seeking undergraduates.

This year, according to the profile on the college’s website, Sweet Briar has 610 degree-seeking undergraduates, with a total enrollment of 760.

Parker says the college is looking to refine its search for students, seeking those who not only apply but who also are likely to enroll.

The college is trying to identify barriers to enrollment. “Financial aid is a huge piece of the mix,” Parker says.

In 2011, the last year for which data is listed on the college website, 98 percent of all degree-seeking undergraduates were awarded aid. That aid was a mix of grants, scholarships, loans and work-study. The average aid package was $19,018.

Sweet Briar has a $90 million endowment, which can be a lifeline to students. But the college’s Plan for Sustainable Excellence puts a premium on preserving the endowment and curtailing expenses.

The college also hopes to make better use of its existing assets. Sweet Briar has an asset that is staggering in its proportions. The college campus spreads out over 3,250 acres.

To take better advantage of the campus, Sweet Briar is developing courses that dovetail with its “Landscape for Learning” theme. It is trying to recruit students with interests in the outdoors and the environment.

“We also have a strong business program, and one of two engineering programs among women’s colleges,” Parker says, pointing to women who have career interests in those areas.

Attracting adult women who want to earn a college degree is also an interest of Sweet Briar, as it strives to engage with the nearby Lynchburg area and beyond.

One of Sweet Briar’s hallmarks is its equestrian program. It has a long list of students who have distinguished themselves at various equestrian events across the country.

Parker says the college is reaching out to the equestrian community as it strives to expand its own program.

Currently, the college offers more than 20 courses related to riding, jumping and training horses, as well as a certificate in equine studies.

With more than 18 miles of trails and a 130-acre on-campus riding center, Sweet Briar has few peers with the breadth and scope of its equestrian offerings and facilities.

Parker said women’s colleges are an extremely important option in the higher education ecosystem, for the families and students who prefer that model.

“What’s not clear is how many institutions in that ecosystem we need to meet the need,” she says. “It’s not clear how many dedicated to that mission will ultimately sustain themselves.”