The face of downtown Richmond is becoming more residential. While high-rise office towers, multi-use projects and hotels fill the skyline, older office buildings are being retrofitted into loft apartments and condominiums.

The trend is boosting the area’s population.  In fact, the downtown population is higher than it has been in recent history, rising from 14,973 in the 2010 U.S. Census to 18,466 in 2012, according to the Richmond Regional Planning District Commission. Today the estimated population is “closer to 20,000,” says Lucy Meade, director of marketing and development at Venture Richmond.

It’s not just the downtown area seeing an increase in population. According to the Census Bureau’s latest data, the population of the city of Richmond was 217,853 on July 1, an increase of 6.7 percent since the 2010 census.

The surge in people living in the downtown/Shockoe Bottom area has spurred new restaurants and bars but very little service-related retail. People living downtown can grab a meal but would have trouble finding a nearby dry cleaner or options for grocery shopping.

So why has service retail been slow to follow the bump in population? It’s a complex issue driven by several factors such as low foot traffic after dark and on weekends, limited land availability and multiple land ownership.

“Residential has to get there first, and we have been having residential growth,” says Connie Nielsen, a senior vice president at Cushman & Wakefield|Thalhimer in Richmond. “Retailers breed retailers. You have to get one or two to step up.” Once those pioneering retailers succeed, brokers predict, others will follow. 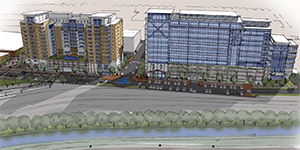 The lack of retail isn’t due to a lag in downtown development.  Millennials (people born between 1981 and 1997) and baby boomers have been flocking to multi-family projects, which represented more than $1 billion of total investment during the past year. In the past two years, 1,381 loft apartments were completed, and there are 1,288 lofts underway now, says Meade. New developments under construction include Reynolds South, the 17-acre site of a former metals plant in Manchester that’s being converted into a mixed-use project. It will include an office and residential tower, with 250 apartment units, and eventually a retail section of 34,000 square feet at Fourth and Hull streets.

California-based Stone Brewing Co. chose Richmond for a retail and manufacturing project: a new restaurant and brewery. Site work is underway on Stone’s 12-acre brewery site in the Greater Fulton area. A second phase of development will bring a restaurant and retail beer garden to what is now the Intermediate Terminal Building on the James River — amenities expected to spur more retail opportunities downtown.
Increased tourism should help new hotels such as the combined Marriott Courtyard and Residence Inn hotels at 14th and Cary streets and the still-to-be-completed Hampton Inn & Suites and Homewood Suites at 700 East Main.

National supermarket chain Kroger sees potential in the downtown area. “We want to penetrate some of the areas east that we don’t serve,” says Fenton Childers, head of real estate for Kroger Mid-Atlantic. “We are definitely interested in being part of that overall redevelopment. We are just waiting for developers and landowners to get a plan together that respects the historic nature of the area and where we could all co-exist.”

Kroger was part of Richmond Mayor Dwight Jones’ November 2013 proposal for a mixed-used project that included a new baseball stadium in the Shockoe Bottom area. The mayor later withdrew the proposal after encountering stiff resistance from the Richmond City Council. Some members wanted more information about the finances behind the project, and there was possible opposition to locating a baseball stadium in the heart of a historic area where slaves were once sold.

Yet, Kroger remains interested in a downtown location. When long-term plans are formulated, “then we are ready to step in and get serious about negotiating and planning,” says Childers.  “We are standing ready to do our part.”
Currently Kroger’s most urban store is located on Lombardy Street in the Virginia Commonwealth University (VCU) corridor. “That store has been a real success for us,” he says.

The VCU area of the city, located just a few miles from downtown, has seen a huge boom in retail development in the last few years with national retailers such as Barnes & Noble, Starbucks, Chick-fil-A, Einstein’s and IHOP moving in. VCU also constructed a Walmart on Campus in a seven-story office/classroom building on West Grace Street that was scheduled to open in April. The new store is part of a pilot plan to put smaller Walmarts on college campuses.

Smaller grocery stores are aware of the potential possibilities downtown. “I have had it on my radar,” says Josh Walls, director of real estate for Aldi. Walls recently worked with a Midlothian-based development firm, The Rebkee Co., on the store’s upcoming Boulevard site, scheduled to open next year.

Development on the Boulevard, another close-in location to downtown, is a prime example of retail development following housing. The area has seen an influx of new lofts in addition to housing that already was in place. “We look for strong retail corridors, areas where shoppers are going,” says Walls. “There is great density in that area.”

Charlie Diradour, president of Richmond-based Lion’s Paw Development Co., brought Growlers to Go, En Su Boca and Starbucks to the Boulevard. His company also has a lease with Buskey Cider on a nearby Leigh Street building.

He sees a need for retail that benefits people on a day-to-day basis, whether they live on the Boulevard or downtown. “We need to think about how we get people to start businesses and not just restaurants, because everybody has the same bottle of Jack Daniel’s,” he says. “You have to get your [housing] down and when that is in place now you have to fill in with retail.”

While he sees downtown Richmond as a prime location for service-related retail, Rob Hargett, a partner in Rebkee Co., understands that bringing it in is a slow process because of a lack of land availability and “increased land values,” he says. “There are no big parcels of land.”

He finds that many large suburban-market grocers may say they want to go urban, but they don’t want to scale down their footprint to fit into an already existing building.   “We are not to the point where we will see a store like Harris Teeter is in Washington, D.C., on the bottom floor with apartments above,” he says.

In the 1990s, when Tobacco Row was developed from old warehouses on East Cary Street, there was one major owner, Forest City, involved in the downtown project, recalls McNamee, who worked in the re-lease stage of the development. Forest City created a broad public/private partnership and a plan to finance and redevelop the warehouses, while preserving their historical significance. “They were successful in getting a drugstore and grocery store,” says McNamee.

It was much the same story in the 1980s when Shockoe Slip had two primary owners and developers. “They worked hand-in-hand picking retailers for downtown. Now you have multiple ownership with different interests.”

Two areas primed for retail are the iconic Main Street Station and 17th Street Farmers’ Market. The station’s train-shed project, currently under construction, will transform the building into a multimodal transportation center with retail and other entities using the space. Restoration is projected to be complete in mid-2016. Renovations also are planned for the farmers market that will transform it into a new urban square market after funding is secured.

Jeannie Welliver, project development manager for the city’s Department of Economic and Community Development, says Richmond is starting “to tip to where Target and Walmart types of retail are starting to have interest,” she says. “A lot of national retailers are changing the way they see our market. If your city grows in market size, they start looking at ways to be there.”

Nielsen of Cushman & Wake­field|Thalhimer says one of the city’s biggest problems is that “no one walking is around. We bring in national folks and they say, ‘Where is everybody?’ We have a daytime population, but that empties out at night.  That hurts us.” In places like Charlotte and Washington, D.C., there’s plenty of foot traffic, adds Nielsen. What retailers see when they visit downtown Richmond is businesses shutting down around 5 or 6 p.m. These retailers don’t want five-day businesses. They want seven-day.”

As more people move downtown, there’s been an uptick in outdoor activities, such as walking and biking, which helps create energy in the area. In September, Richmond will enjoy national media exposure when it hosts the UCI Road World Championship bike races, with some of the race route including downtown streets.

Nielsen says Richmond is on the fringe when it comes to bringing in national retailers. “I am starting to see retailers interested or at least willing to take a look,” she says. “A year ago it was, ‘No, thank you.’”