Home Interview Where the action is

Where the action is

In the wake of Amazon.com Inc.’s late 2018 announcement that its $2.5 billion HQ2 East Coast headquarters would locate in Arlington County, there’s been a game of musical chairs taking place among Northern Virginia’s economic development offices.

The friendly 40-year-old Lynchburg native comes to Northern Virginia after serving for more than five years as economic director for Danville, where he helped turn around the former textile hub’s fortunes after many big employers left town in the 1990s and 2000s. Tucker also has worked as an enterprise zone program administrator for the Virginia Department of Housing & Community Development and was assistant director of economic development for James City County.

Before he started out in economic development in Lynchburg, however, Tucker followed in his parents’ footsteps, teaching middle-school math and Spanish in the city’s public schools for three years. Volunteering at an entrepreneurial camp for seventh-graders led him on his current career path, and he’s still passionate about education. Tucker spoke with Virginia Business during the second week of his new job in Arlington, where he works a few minutes’ drive away from Amazon HQ2, now starting construction in the Pentagon City and Crystal City areas.

Virginia Business: What interested you in this job? What did you think when it came on your radar?

Telly Tucker: Probably a flurry of thoughts, but I think naturally [in] the economic development world, the conversation [centered] around Amazon. The generational economic development project has been the center of conversation in economic development circles over the last few years, and the entire commonwealth of Virginia was ecstatic about the [HQ2] win for Virginia. Naturally, that came to mind. I think one of the other things that has always impressed me about Arlington is it’s been a leader, particularly in the tourism industry.

It’s been ranked No. 1 in Virginia, I think, since 2009 … as far as visitor spending. Arlington has been a trendsetter for the rest of the state.

Looking at my background, I spent time in Williamsburg, and tourism was a big part of economic development strategy there, but at the same time, I’m having the opportunity to work on exciting projects like Amazon, Deloitte and Nestlé USA and a list of other Fortune 500 companies. From a career professional development point of view, it was an ideal opportunity.

VB: What is your philosophy on encouraging further growth in industries where the region is already strong?

Tucker: There’s really been a conscious effort by the county to diversify, and we want to continue to do that. The Deloittes, the Amazons, the legal [firms] — those have helped to diversify the industry base in Arlington.

Tucker: As part of Small Business Week in Virginia, Arlington County is going to participate with the governor in an announcement in May, and it’s going to highlight some of the work that our business launch team has done with small business.

VB: How does transportation factor into a thriving business environment?

Tucker: Transportation has always been one of the hot topics in Northern Virginia and the Washington, D.C., metropolitan area. One of the things that came out in 2018 was the dedicated Metrorail funding that was a regional cross-jurisdictional [effort] … to pull together that plan … [and] other partnerships like the new Long Bridge across the Potomac River, creating a pathway to passenger and freight operations in the region and to the Washington, D.C., corridor, and expanding the American Legion Bridge. … Transportation directly affects commerce, and so it’s constantly evolving.

VB: Your predecessor, Victor Hoskins, was instrumental in persuading Amazon to locate in Arlington. How will you help Amazon move forward on HQ2?

Tucker: I want to be careful to highlight the strength of the Arlington economic development team. It’s a very high-performing team, a strong team, and one which really operates very independently. Naturally, there’s going to be processes that [Amazon will need] to go through to get approval to build what they’re going to be building, and wanting to make sure all that continues to go smoothly. But at the same time, we want to make sure that we continue to improve the regional partnerships that were developed. The newly formed Northern Virginia Economic Development Alliance is one. The beautiful thing is, I served with many of the other economic developers in the region on the Virginia Economic Development Association board, and I’ve worked with them for the last 15 years. We certainly don’t want to give anybody the impression that because now we’ve landed Amazon, that somehow we close the door, turn off the lights and everyone goes home. We want to continue to diversify because it strengthens the regional economy.

VB: Do you think there’s a place for a casino in Northern Virginia, as a November JLARC study suggested?

Tucker: It has not been a focus for Arlington at this point in time that I’m aware of. Certainly no economic developer ever says that they won’t consider opportunities should the opportunity arise, but it really has not been a focus for any of the leadership that I’ve spoken with. … At this point, we are holding pretty true to our economic development strategy. We are now filling the office space that we have and continuing to lower our vacancy rate. Currently, we’re below 15% vacancy, down from somewhere around 23% over the last few years, and that’ll continue to be a focus for us … [and] continuing to support existing small businesses.

VB: You also cultivated regional cooperation in Danville, especially with Pittsylvania County. What lessons will you bring from that job to this one?

Tucker: One of the things I’m most proud of is our ability to work collaboratively and achieve new heights for our region. Some of the things that we did in Danville was really drive relationships between K-12 [and] higher education, community college [and] university-level research institutions, making sure that they understood economic development strategy and where our Venn diagrams overlap.

One of the most frequently asked questions in economic development is now centered around workforce: How will I find a highly skilled, qualified workforce to support not only the target industries but the existing industry and their growth needs?

We’ve seen evidence of what regional collaboration can do now in Northern Virginia. I mentioned the Metrorail project earlier, the Amazon project, and I think that’s just the tip of the iceberg. I think there are other really impactful things that can happen, projects that can happen as a result of us working together.

I’m really looking forward to digging in on the Northern Virginia Economic Development Alliance as one of those methods, but also at the same time, I look forward to working with our local universities — Marymount, George Mason, Virginia Tech — as well. They’re going to be a big part of developing workable solutions, and I think that has to be a collaborative approach.

Our role is to make sure that the voice of the private sector is communicated to our educational partners, and that we keep that at the forefront of our focus to make sure that whatever new programs or curriculum that we develop, that it does indeed meet the goal of supporting our industry long-term.

VB: Considering some of the other big players in the county — Nestlé, Deloitte and Lidl —what skill sets are required to work with global businesses?

Tucker: One of the unique things about Northern Virginia is it’s a melting pot of different cultures, which offers you the opportunity to learn more about cultures that are different than your own.

Nestlé has a major manufacturing facility in Danville that we worked with for the last six years and had to hire employees. I was delighted … to hear that it will be moving its U.S. headquarters from California to Virginia. I got to see their new location in Rosslyn. … [It’s] quite impressive. The original project, I think, was a 205,000-square-foot space with 748 jobs. They continue to expand and, with their sister company Gerber, now they occupy over 300,000 square feet in Rosslyn.

I think communication will play a big role in working with them, listening to what their needs are. We have to be flexible. We have to be willing to adapt to industry needs because they’re constantly changing; they don’t remain stagnant. Our ability to be agile in economic development and as a county, I think, plays a role in supporting industry.

VB: You’re also an accomplished pianist who has performed around the world and directed musical productions. Did you ever consider being a professional musician?

Tucker: Interestingly, I did. I majored in music my freshman year of college. … My freshman year of college I studied at Morgan State University in Baltimore, and it was unbelievably rich in cultural experience during that time. I got to perform at the reopening of the Kennedy Center. President [Bill] Clinton [and first lady Hillary Clinton] were there, and I got an opportunity to meet them and sing “Happy Birthday” to her. I think what ultimately kind of changed the path for me was music has been and continuously is such an outlet for me, a stress reliever, something that takes me to another place. I never wanted it to feel like work. What I do on weekends is part of my outlet, my stress relief. I need to have that separation, and so that’s why I chose to go into business, but music will continue to remain a very big part of my life.

VB: You worked as a public school teacher after graduating from James Madison University. How did that experience shape you?

Tucker: My parents were both school teachers in the public school system their entire career. I had a grandfather who was a principal as well. The value of education was instilled from a very young age. …

The intersection of education and economic development is so critical, which is why I’m so passionate about the intersection of workforce development education. The passion that I had for building those types of relationships in Danville was based largely on my upbringing and understanding how to apply your learning — how does what you learn in the classroom apply to your life beyond school?

Learning is so much richer when you can draw a parallel between how you apply that learning in a real-life setting. That was a focus for us and, if you look at test scores, students in the Danville region who were in career technical fields scored about a 99% passage rate on Standards of Learning tests. The better employees they will be, the more successful the business will be — they will continue to grow, they will continue to innovate.

VB: What’s your focus for your first six months?

Tucker: Getting into the community, talking to as many people as I can, building relationships, continuing to strengthen partnerships, thinking collaboratively. Then listening to what the needs are from the business community. I want that to be driven from information that we receive from our stakeholders and not a top-down approach of, “We know what’s best for everyone,” but really listening and being attentive to their needs and then developing solutions that everybody feels like they had buy-in on. I’ve heard the phrase “The Arlington Way” numerous times since I’ve been here. It speaks to the community-driven collaborative approach to the planning and problem-solving and addressing challenges in the community. 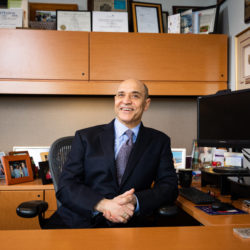 ‘As resilient as you get’