This year’s fight over whether to expand Medicaid in Virginia under the 2010 Affordable Care Act wasn’t really much of a battle. Opponents of expansion — primarily the Republican-controlled House of Delegates — stood fast during this year’s General Assembly session and gave Medicaid supporters a serious beat down.

Expansion was backed by Gov. Terry McAuliffe and by the state’s powerful health-care industry, most notably the Virginia Hospital & Healthcare Association (VHHA).

So now what? Supporters warned that, if the commonwealth didn’t take the federal dollars, it would hurt the estimated 420,000 people who could have received health-care coverage under an expanded Medicaid program. Also affected would be nonprofit and for-profit providers that already absorb much of the cost of treating indigent patients.

For now, the cost of that coverage will continue to come largely from the budgets of hospitals and free clinics. Nobody yet predicts a wave of hospital closings, but financial strain and reductions in services will continue. “I don’t think you’ll see anything dramatically change for the worse, but I do think the fiscal pressure will increase,” says William A. Hazel Jr., Virginia’s secretary of health and human resources.

Dealing with Medicare cuts
The lack of revenue from federal sources already is a sore point for hospitals, because cuts in Medicare included in the ACA were supposed to be replaced by increased Medicaid funding. But when the Supreme Court ruled in 2012 that states could opt out of expanding Medicaid, hospitals were stuck.

What’s more, Medicare providers, including doctors and hospitals, were dealt a 2 percent cut by sequestration-related federal spending reductions, and new regulatory changes by the Centers for Medicare & Medicaid Services also have hurt hospital budgets, says Katharine Webb, senior vice president at VHHA. That 2 percent cut in funding to Virginia hospitals equals $85 million this year and next year and will climb to $89 million in 2018, according to VHHA figures. In addition, funding cuts to Virginia hospitals related to the ACA will rise from $122 million this year to $451 million in 2018.

After this year’s whipping in the General Assembly, frustration is high. Hospital executives say the opposition in the state legislature isn’t taking them seriously. “I just scratch my head. Our members are doing their jobs,” Webb says. “What have health systems done wrong that there is no offer of a solution to this very serious problem? I don’t know the answer.”

One argument from Medicaid expansion opponents is that the federal government can’t be trusted to keep its promise under the ACA to cover most of the added cost to states. “It doesn’t make sense,” Deaton says. “We take federal funds for other types of initiatives in our state, but we’re not interested in taking federal funds for this? I don’t understand that.” 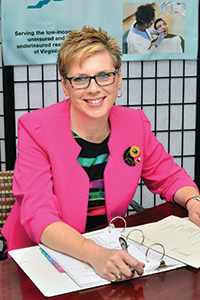 Among those waiting to see what the ripple effect will be is Linda Wilkinson, CEO of the Virginia Association of Free & Charitable Clinics. She says the financial pressure will be passed down through hospitals and health-care systems to the free clinics that provide services for the most needy. “The biggest impact we’re going to see is the millions and millions of dollars of donated services” that hospitals, especially in more rural areas, may no longer be able to afford, she says. “A lot of that may be completely eliminated or significantly reduced.”

This includes medications, screening services such as mammograms and CT scans. Hospitals and pharmacies are major donors of those services and supplies to uninsured people.
So cutting the federal payments to hospitals and health systems and then also expecting them to continue to subsidize health care for the uninsured is a recipe for failure, Wilkinson and others say. Of the roughly 70,000 people the free clinics serve, about 52,000 would be eligible for Medicaid if the state accepted the federal dollars, she says. Expansion supporters fight the perception that Medicaid is a welfare program. “It isn’t,” Wilkinson says. “These are hardworking people living in the commonwealth who are going to suffer solely because they are uninsured.”

The pressure will be felt in a lot of places. Southwest Virginia has about 34,000 nonelderly adults who would be eligible for Medicaid, representing nearly 42 percent of the total number of uninsured in localities from Bristol to Wise and Lee counties, according to data from the Virginia Poverty Law Center and The Commonwealth Institute. The area with the highest share of nonelderly, uninsured adults who would be Medicaid eligible is in Prince William County and the cities of Manassas and Manassas Park, with nearly 49 percent.

McAuliffe’s next move
The Republican leaders of the Virginia Senate and House of Delegates, Majority Leader Thomas K. Norment and House Speaker William J. Howell, have said that the legislature will hold “full and fair” debate the week of Sept. 22 on accepting federal Medicaid funds to expand health coverage.

Democrats, however, say the session is just for show, given Republicans’ staunch opposition to Medicaid expansion. Both houses of the legislature came under Republican control when Democratic state Sen. Phillip Puckett resigned in June, giving the GOP a one-vote majority.

Still looming is whatever step the governor might want to take to expand Medicaid without General Assembly approval. After failing to win the showdown in this year’s budget fight, McAuliffe has asked Hazel to come up with a Medicaid expansion plan.

Hazel is understandably reticent on the details of that plan. “We’re working on what his options are. The governor has clearly asked us to explore all of our options and that’s what we’re going to do,” he said in an interview in late July. The House of Delegates “has said that they’ll consider honestly any alternatives, and we’ll see what they are.”