‘We broke a logjam’

New laws are expected to boost solar development in Virginia

The sun is finally shining on solar development in Virginia. After failing to act on solar energy legislation in 2016, this year’s General Assembly passed three bills that advocates say will boost development of this renewable source.

The package comes as prices for new solar generation are falling and other states are already far ahead of Virginia in the quest to harvest jobs and investment from the sun.

The legislation, which at press time was awaiting the governor’s signature, addresses three areas: community solar, small agricultural generators and the expansion of a streamlined permitting process for small renewable projects.

In brief, the community solar bill requires Dominion Virginia Power and Appalachian Power to conduct a three-year pilot program for retail customers.  The utilities would buy electricity from third-party providers and offer it to their customers at a blended rate. In Appalachian’s service area, the minimum generating capacity of an eligible solar provider would be 0.5 megawatts (MW) and the maximum capacity, 10 MW. In Dominion’s service area, the range would be at least 10 MW up to 40 MW.

The permitting bill increases the capacity of small renewable energy projects (solar and wind) — from 100 to 150 MW — that could be eligible for an expedited process, exempt from environmental review by the State Corporation Commission.

The bill on agricultural generators allows farmers to use up to 25 percent of their land for a solar generating facility. They also could sell excess energy — not used in farming operations — to their utility.

Karen Schaufeld, whose family owns a 260-acre farm in Leesburg, is especially pleased that farms will be allowed to sell excess solar energy as a crop, “much like you would sell peaches or corn.”

Schaufeld already has installed a group of solar arrays at her farm on a field that wasn’t particularly fertile for growing crops. She has enough arrays to generate 466 kilowatts, which power the needs of all nine buildings on her New River Farm.

Schaufeld is the founder of Powered by Facts, an advocacy organization for farmers interested in renewable energy. That role landed her a seat at the table of a collaborative process that helped beget this year’s solar energy legislation.

Reaching a consensus
In spring 2016, shortly after the General Assembly session, a joint House/Senate labor and commerce subcommittee recommended that  stakeholders begin meeting with a professional mediator to settle their differences over solar development.  The process continued for eight months and included more than 50 meetings or telephone conferences.

“The process was unprecedented,” says Katharine Bond, a senior policy adviser with Dominion. “It was the first time solar advocates and representatives from Dominion sat around the table dozens of times to see if we could reach consensus on a number of topics.”

The upshot was that the ball did move on solar energy. This time around Mark Rubin, executive director of the Virginia Center for Consensus Building at Virginia Commonwealth University, was hired to mediate meetings involving Dominion Virginia Power, Appalachian Power, the Maryland, D.C. and Virginia Solar Energy Industries Association, the state’s electric cooperatives and Powered by Facts.

Rubin said he charged an hourly rate, which he did not disclose, and added that each player in the group shared in a portion of the cost. While environmental groups, such as the Virginia League of Conservation Voters and the Southern Environmental Law Center (SELC) were not at the table, they were consulted, according to Rubin.

“We vetted everything with the environmental groups, the business groups. Once we had a product, we talked to a large swath of people to get their reaction, and we made changes based what we heard, “ says Rubin.

The result? “The parties all worked hard to work through any issues that they had, and they were very positive about it,” says Rubin. “They shared a lot of information that I think they had not shared before. They created some trust and respect that allows them to do this some more. I do think that, in general, using a collaborative approach can be very helpful on complex, policy issues such as energy.”

Another benefit, he added, is that when stakeholders are in agreement over proposed legislation, “that has a big advantage. The legislators think the bills have been worked over pretty well, so that usually helps in the legislative process.”
Rubin says the group is gearing up to meet again, so they can begin work on bills that might go before the 2018 General Assembly. “There are other subjects we are going to see if we can tackle. Clearly we need to talk about net metering reform. That would affect residential rooftop solar. I know that’s a big issue.”

Will Cleveland, a SELC staff attorney in Charlottesville, says overall the process was “…  a good thing, but the group could use more transparency and be a little broader in its formal membership. Not everyone who had a stake in the game was included, and I’m not just talking about the environmental community. There was no consumer advocate.”

Just the first step
Other players say that this year’s package of laws is only a first step, but it was an important step. “We broke the logjam. Nothing had been getting done,” says Schaufeld.

She cites as progress the bill that allows farmers to build up to 1.5 megawatts of renewable capacity on their land or as much as 150 percent of the amount of electricity they use; whichever is less. That’s an increase from prior rules, which allowed only 100 percent of consumption.

Small agricultural generators must enter into a power-purchase agreement with their utility to sell the electricity generated, and the utility must pay them at a fair market price.

Asked about the upfront capital cost of installing her solar arrays, Schaufeld says the expense is about $2,000 per kilowatt, with about a 10-year payback for most farmers. “That’s why it matters that a farmer gets paid a decent price for the energy,” she says.

According to the U.S. Energy Information Administration, the national average for the cost of new solar generation is falling. In 2010, the average levelized capital cost for solar PV (photovoltaic) was $396.10 per megawatt hour. In 2016, the national average (excluding tax credits) had dropped 81.2 percent to $74.20.

Last year saw the U.S. solar market nearly doubled in size for new installs, compared to the previous year, with 14,626 MW installed, according to a report from the Solar Energy Industries Association (SEIA). For the first time, solar ranked as the No. 1 source of new electric generating capacity additions on an annual basis.

Helping to drive that growth is a 30 percent federal tax credit. It allows Americans to deduct 30 percent of the cost of installing a solar energy system on their federal taxes. Some states, not including Virginia, offer an additional tax credit.   Among the states, Virginia ranks 20th for solar energy production, with less than 400 MW installed, 184 solar companies and 3,236 solar jobs.

Utilities urged to do more 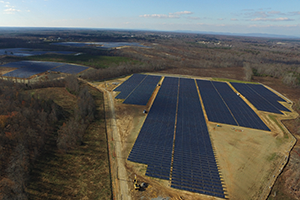 In February 2015, Dominion committed to developing 400 megawatts of large-scale solar generation facilities in Virginia and placing them in service by 2020.  In February this year, the company reported that it had invested $800 million in solar power. “We’re already at 398 MW, and we should have more than 400 MW in operation by the end of this year,” Bond says. “That’s due in part to phenomenal partnerships we have with companies across the state.”

Dominion has collaborated with companies such as Amazon, Canon, Capital One Financial Corp. and Microsoft, along with many colleges to operate and develop solar facilities.

Yet the state is pushing to do more.  Legislation passed by the General Assembly in 2015 said that development of up to 500 megawatts of solar projects in the state by 2020 was “in the public interest.” That language was included in a controversial Senate bill, proposed by state Sen. Frank W. Wagner (R-Virginia Beach), that froze Dominion’s base rates — which make up about 60 percent of the typical residential bill — at 2015 levels for five years.

At the time, Dominion said the legislation was needed to help provide price stability for customers as the company dealt with federal air-quality regulations, including those limiting power station carbon dioxide emissions.  However, President Donald Trump has said he will work to overturn regulations under the Clean Power Plan pushed by former President Barack Obama’s administration. That turn of events prompted cries from some legislators during this session to overturn Dominion’s rate freeze.

Wagner, chairman of the Senate Committee on Commerce and Labor, was also the legislator who introduced the successful package of solar bills this year. He’s one of three Republications seeking the nomination to run for governor in the fall.

Wagner is pleased with how things turned out.  “We got a first down, and we need to keep moving, because solar is going to be an important part of the mix in Virginia.”

As for the rate freeze, he says there’s still uncertainty about what the energy policy will be in Washington, and he sees no reason to overturn it.

“The actual kilowatt rates are less today than they were when the bill passed. I can’t name a single other commodity where the rates were cheaper than they were three years ago,  so I think we’re on the right track.”