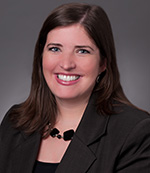 Wakefield joined GRP, the regional economic development organization for Richmond and its surrounding counties, in 2017 as senior vice president of marketing. During the organization’s search for its next president from January through August, Wakefield served as its interim leader. Lara Fritts joined GRP as president and CEO in September.

Before coming to Richmond, Wakefield was vice president of marketing for the Orlando (Florida) Economic Development Commission — now the Orlando Economic Partnership — for 11 years. She received a master’s degree in communications from the University of Central Florida and holds an Accreditation in Public Relations.