Pablo Di Si, the Herndon-based president and CEO of Volkswagen Group of America, has been elected chairman of Autos Drive America, a trade association that represents 12 international automakers with presences in the United States, Volkswagen announced Tuesday.

“International automakers are critical to the U.S. economy,” Di Si said in a statement. “Companies like ours are embracing the nation’s transition to electric vehicles by investing billions of dollars in strengthening domestic assembly and supply chains, and creating thousands of new jobs for American people. As chairman of Autos Drive America, I’ll be a vocal advocate for international automakers in the United States and make sure our voice is heard.”

Before joining VW in 2014 as president and CEO of its Argentinian arm, Di Si worked in finance and business development in the U.S. and Brazil with Fiat Chrysler Automobiles and Kimberly-Clark Corp. after getting his start managing special projects for The Monsanto Co. He has an MBA in international management from Arizona State University, an accounting degree from Northwestern University and a bachelor’s degree from Loyola University of Chicago. Di Si also received management training at Harvard Business School.

“As we begin a new year and usher in a new Congress, Autos Drive America is fortunate to have Pablo Di Si’s energetic leadership at the helm of our board of directors,” said Jennifer Safavian, president and CEO of Autos Drive America. “Our members produce some of the most forward-thinking and innovative vehicles on the market and are leading the charge on vehicle electrification. Pablo’s drive and vision will help us continue to tell our members’ stories and shape our reputation as the nation’s leading advocate for international automakers and their workforce in the U.S.” 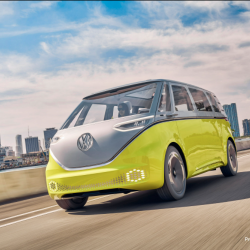 Herndon-based car company falsely claimed it was rebranding as Voltswagen