Virginia Union University announced Wednesday it has appointed Terrell Strayhorn as associate provost for research, innovation and graduate education. He will also serve as director of the Center for the Study of HBCUs (historically Black colleges and universities) and as a tenured professor of urban education in the Evelyn Reid Syphax School of Education.

In his new role, he will work with the university’s chief research officer to oversee graduate studies. As director of the Center for the Study of HBCUs, he will conduct research on leadership styles and contemporary higher education needs.

With more than 15 years of higher education experience, Strayhorn has served on the faculty at University of Tennessee-Knoxville, The Ohio State University and LeMoyne-Owen College. In his previous roles, he managed and directed universitywide research centers and worked on academic grants and graduate pathways.

“Dr. Strayhorn is an experienced academic leader, internationally-recognized education expert and equity-minded scholar,” VUU President and CEO Hakim Lucas said in a statement. “He embodies the leadership characteristics that VUU is recruiting as we emerge to a new globally recognized institution of higher learning.”

Strayhorn earned his bachelor’s degrees in music and religious studies from the University of Virginia and a master’s degree in education policy from U.Va.’s Curry School of Education. He earned his doctorate in higher education from Virginia Tech, and has authored 10 books and nearly 200 journal articles, book chapters and scientific reports. 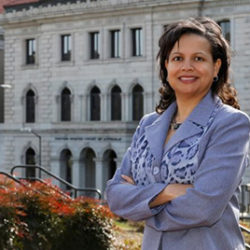 Susan T. Gooden has been the interim dean since May 2018.