On Thursday Virginia Military Institute’s Board of Visitors voted unanimously to remove the statue of Confederate Gen. Stonewall Jackson amid a state probe into reports of a culture of racism at the state-supported university.

According to a statement from Bill Wyatt, VMI spokesman, the board “took bold and unanimous action to move VMI forward. The board ordered the statue of Thomas J. ‘Stonewall’ Jackson moved from the front of the historic barracks to an appropriate location, perhaps the battlefield at New Market. The VMI administration will handle the orderly movement of the statue.”

The vote comes on the heels of the resignation of the school’s superintendent, retired U.S. Army Gen. J.H. Binford Peay III. After an Oct. 17 Washington Post exposé alleged that there is an atmosphere of “relentless racism at the nation’s oldest state-supported military college,” a letter issued by Gov. Ralph Northam and other top state legislators announced a probe into allegations of racism at the Lexington state-supported school.

William “Bill” Boland, president of the board of visitors stated, “I am proud of the commitment by the VMI family to continue fulfilling our mission. VMI, like all aspects of society, must honestly address historical inequities and be intentional about creating a better future.”

Founded in 1839, VMI has been called “The West Point of the South,” and is the oldest state-supported military college in the country. Jackson joined VMI’s faculty in 1851 as a professor of natural and experimental philosophy, a precursor to natural science. The statue of Jackson is located in front of the student barracks, and until recent years, students were required to salute it when they passed. 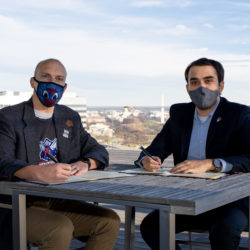