Nationally, the 2018 elections didn’t quite live up to the “blue wave” many Democrats had hoped for. While Democrats took the majority in the House of Representatives — gaining 40 seats — Republicans grew their majority in the Senate.

But in Virginia, Democrats continued their two-year surge. In November, three Democratic female candidates defeated Republican incumbents in congressional races. This followed the 2017 election, which included a 15-seat gain for Democrats in the House of Delegates.

The candidates were just one of the topics covered at the roundtable, held at The Graduate Hotel in Richmond on Nov. 7, just one day after the election. Panelists analyzed what election results meant for this year’s General Assembly session, a split Congress and the 2019 legislative election, when all 140 Virginia delegate and Senate seats will be contested.

In addition to DuVal, panelists included:

Following is an edited transcript of the roundtable discussion.

Virginia Business: Deirdre, how did we see the year of the woman play out? 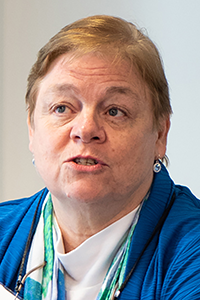 Condit: What we do know from looking around the country is what’s really important is this was not “The year of the woman.” It was not a blue wave. It was the year of Democratic women, because Republican women continue to be remarkably absent. In fact, the divide between the number of Democratic women and Republican women in elected positions around the country literally chasmed more last night. I think that’s something that’s really important for us to pay attention to, and the loss of [U.S. Rep. Barbara Comstock, R-10th] is huge as a consequence of that.

Kidd: I think Virginia has experienced a wave over the last couple of election cycles. … a wave nationally would have meant Democrats swept House seats and Senate seats. Nationally it wasn’t a wave as much as a correction. What’s the correction? The correction is in part this idea that women are shifting pretty firmly toward Democrats — college-educated women, women generally. Democrats are firming up their position in urban areas. They’ve really gained strength in the suburban areas. The 7th [District] race is a reflection of that. And they’re gaining strength among younger voters, especially voters under 44.

Walls: What happened in Virginia with the congressional races and the three women who were elected, I think, really reflects the continuing movement of Virginia away from not very long ago being a Republican state — then for a while was a pretty good bellwether for national politics — into a solidly blue state. Obviously, it’s not a Northeastern state, and it’s very different from a New York or a Massachusetts, but in terms of demographics … it’s increasingly becoming an outlier, certainly from the South and more into a classic blue state. 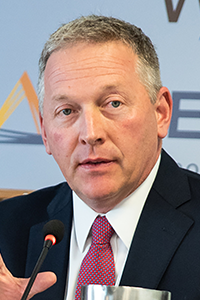 Saxman: I think we’re also starting to see the slow dissolution of the whole notion of red and blue. This is a suburban-dominated country politically … It doesn’t matter if you’re Republican or Democrat or liberal versus conservative. It’s “How are you helping to fix my problems? And my problems are not what urban America has or what rural America has.” And it’s 50 percent of the electorate. Eventually, even the Republican Party in Virginia will have to catch up to that notion that they have to start developing suburban strategies that actually solve problems. What you didn’t see in my estimation was an ideological campaign …
If you look at Massachusetts, Charlie Baker, the Republican governor won 67 percent of the vote. The same night [Democratic U.S.] Sen. Elizabeth Warren got 60 percent of the vote in the same state. Something is shifting dramatically in this country, and the parties are going to have to adjust to that.


Virginia Business: What happened to Dave Brat? He was the giant killer four years ago, and he was roadkill this election.

Saxman: I don’t think he was really roadkill. It was a very close election. Look, he ran a horrible campaign. He was a horrible candidate … Abigail Spanberger ran a pristine campaign. She ran an outstanding campaign and was an excellent candidate, was well-funded and still barely won. Her [challenge] going forward is winning that election in 2020.

Condit: I actually think that Abigail Spanberger ran the best campaign I’ve ever seen as a political scientist. It was disciplined. It was thoughtful. I would like to have taped it from beginning to end to use in my Women in American Politics class to demonstrate how to run a really good political campaign …

… Then he followed it up with one of the worst congressional debates I’ve ever seen. Abigail Spanberger stole that debate and won it by the end, because Dave Brat couldn’t stop saying, “Nancy Pelosi.” 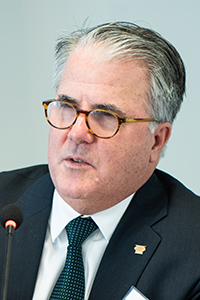 Walls: I’d elaborate on that. In that debate, he was hammering her about Nancy Pelosi, and she gave this speech which at least had the appearance of being extemporaneous, which concluded about who she is and what she stands for: “My name is Abigail Spanberger and is not Nancy Pelosi.” It went viral. It went viral outside the district to lots of women all over the country and certainly around Virginia, who got it and found it pretty gratifying. It made them think of certain annoying moments in their lives. It really helped her a lot. It’s a great demonstration of how sometimes just a spontaneous moment in a campaign really changes things.

I did not see that in the Republican Party happening with the Senate candidate [Stewart.] I didn’t see the Senate candidate embracing or being embraced by those individuals that were running for the House. And to speak to Chris’ point, these three new female congressional representatives are incredibly impressive in their résumés …

Walls: What will happen now that we have a Republican president and Senate and a Democratic House? All the attention in anticipation of that has been on the oversight and the investigations that the Democrats will do and how aggressive will they be. That’s certainly something that’s going to play out.

Another question is: Will this president and his allies in the Senate and the new Democratic leadership in the House actually deal on some issues? This is what normally happens in a situation like this, but we have a different sort of president now. 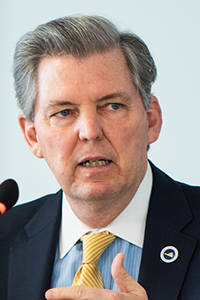 DuVal: I would argue it’s in their best interest to demonstrate some competency in governing. One [area] would be infrastructure for America. If you spend any time going to airports in America, if you spend any time in our nation’s capital, you somewhat are surprised that this is the most prosperous country in the world by the infrastructure that we have to deal with. I hope they will look at immigration as a national competitiveness issue, because we don’t have enough workers in our state, and we don’t have enough workers in our country to fill the job opportunities that American business has and the potential it has.

Condit: I think that it’s really important to point out that this is why it’s really great that we just broke the 100-woman barrier in Congress. … There’s lots of research that we scholars have done that demonstrates that women across the aisle have been more productive in Congress and in state legislatures in compromising and working for policy-oriented solutions rather than focusing on party status and identity …

On the other hand, you’re going to see, coming out of California primarily, progressive Democrats who are going to be looking for blood against [Senate Majority Leader] Mitch McConnell. There’s a part of the Democratic infrastructure that’s really angry at how Mitch McConnell has dealt with Democrats over the last couple of years, and I think there’s going to be resistance to wanting to roll over.

I think the honeymoon period is no longer than six weeks after people get sworn in, and then suddenly we’re on to 2020. And Democratic candidates coming out of Congress are going to be feeding their base … they’re going to have to get productive legislation done without looking like they’ve done anything that Trump and Mitch McConnell want done.

Kidd: I actually think there’s momentum and pressure to work together. There’s a big event that’s looming that will probably be the pivot event, and that is the release of the report by [Special Counsel] Robert Mueller … It will change the dynamics of what goes on in the House and the Senate.

That report could completely destroy any working relationship that Republicans or Democrats are able to cobble together in the House or the Senate. The worst kind of report that can be put out would be a report that alleges wrongdoing that happened years ago, prior to the 2016 election, or alleges wrongdoing that is on the edge, not quite clear-cut legal wrongdoing. That would just be like throwing a hand grenade into the political environment.

A report that laid out clear wrongdoing, clear legal issues, would still do the same sort of thing, but it would be less easy for Republicans in the House or Senate to defend it.

Saxman: I’m more concerned about the other R-word, recession. The economy’s going to run out of steam at some point … more likely than not in 2020 versus 2019.

DuVal: I think they’re going to support new initiatives around workforce training and reinventing high school … childhood education investment. They’re going to look for ways to win. It’s a short session, 45 days. There’s not a long time to debate issues, and I hope that they will focus on areas that will improve our national rankings to make Virginia number one. In order to do that, they’re going to have to look at things like workforce training, civil justice reform, tort reform and areas the business community can work with the administration. 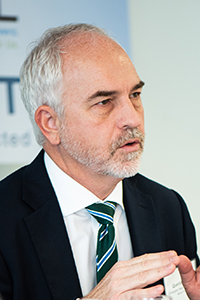 Kidd: The effects of the current political environment of Virginia and the way they emanate nationally were already baked in Virginia. We had the luxury along with New Jersey of having a test case, a sense of what this sort of anti-Trump political reaction was going to be … In my mind, after this [federal] court redraws the House of Delegates seats, I think Democrats are probably going to be at a 54, 55-seat edge … So the real question is going to be what happens in the Senate.

The business community is going to have to be thinking about broader bipartisan coalitions. I also think the Republicans know that this change is coming. For example, I think Medicaid expansion happened last year, because the Republican leadership recognized that within two or three years, within this governor’s time, [Democrats are] going to control the legislature, and they’re going to expand Medicaid anyway. “We might as well expand it on our terms.” I think that’s what happened.

DuVal: I think the only contentious aspect may have not surfaced yet, but it will be over how to spend the money. There are a number of groups that want to see tax reform occur. Tax reform is going to be talked about. There’ll be bills to change the tax code a number of different ways. The business community certainly would like to see a more competitive tax code.

Saxman: If I can, it’s going to go to the earlier comment made about the suburbanization of the American electorate. When you have Medicaid bumping up against K-12 in the budget, that’s a tough vote to go home and defend. Especially when your teacher base might disagree with you, and then there’s going to be some tension here.

… At the same time as the 2019 [election] cycle is going to be the national overlay of Iowa, New Hampshire, South Carolina, Nevada caucuses … At the same time the investigations are ongoing, and we’re having economic headwinds hit us. This is the dynamic that’s going to force itself out to be the test case in November of next year. Because we’re only 15 months away from Iowa; isn’t that fun?

If stay-at-home order is lifted on June 10, most hospitals would exceed capacity this summer, researchers forecast.