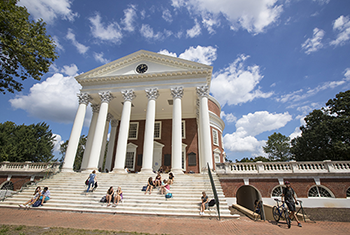 The rankings of more than 800 colleges and universities are based on 15 indicators in four areas: outcomes, resources, engagement and environment.

Outcomes account for 40% of each school’s overall score. That measure includes the salaries that graduates earn and the debt they take on to attend college.

The resources area (30% of a school’s score) examines the investment that schools make in instruction and student services.

Engagement (a 20% weighting), taken from a survey of students, looks at the quality of teaching and interactions with faculty and other students.

Environment (10% weighting) looks at the diversity of the college community.

Other Virginia schools listed among in the top 400 were:

Hampton University, the University of Lynchburg, Randolph-Macon College and Shenandoah University were all included in an alphabetically listed group ranking of schools for spots 401 through 500.

The report also included a number of breakouts of top 10 schools in various categories.

U.Va. ranked 10th among top public universities. Also, VMI was fourth and W&L tied for eighth among the top 10 “No Regrets” schools. Those are colleges that students ranked highest for being worth the expense.