Amid grim headlines related to the coronavirus, Virginia has one piece of bright news — the commonwealth leads the nation in the percentage of citizens who have downloaded a COVID-19 app to alert users about possible instances of exposure to the coronavirus.

According to a Dec. 7 report from The New York Times, a higher percentage of Virginians have downloaded the state’s COVIDWISE coronavirus exposure app, compared with apps offered by other states. As of Dec. 10, nearly 900,000 people had downloaded Virginia’s free mobile app.

Developed by the Virginia Department of Health in partnership with California-based tech company SpringML Inc., COVIDWISE notifies app users if they have been in close proximity with another individual who has tested positive for COVID-19. COVIDWISE launched on Aug. 5, making Virginia the first state to unveil a coronavirus app using a contact tracing system jointly developed by Apple Inc. and Google LLC using Bluetooth Low Energy (LE) technology.

Once someone downloads the app and opts into its notification system, COVIDWISE generates an anonymous token for the user’s Android or iOS device. These anonymous tokens change every 10 to 20 minutes to ensure that they can’t be used to identify a user’s location. Devices that come in proximity with each other exchange tokens via Bluetooth LE technology. Twice a day, the app checks these tokens against those associated with COVID-19 cases over the past 14 days.

COVIDWISE cost $229,000 to develop and has a maintenance and operation fee of $29,000 to keep it working over the next year.

Even after the “honeymoon period” of the initial launch, Jeff Stover, executive adviser to Virginia’s health commissioner, says downloads of the app have been steady, usually averaging between 2,000 and 5,000 new downloads per day. As of Dec. 10, 10,643 notifications had gone out warning users of potential exposures.

Stover says the fact that Virginia got its app developed so quickly has helped.

“We were first in the country to do this, so we were fortunate in that regard,” he says. “One of the pros in going first was we got a fair amount of media coverage from that, and that’s been good for marketing.”

“We needed to blanket the state with marketing so that they would know what it is and how to get it,” Stover says.

Still, he notes that some people may be reticent to download an app out of surveillance fears.

“We knew that exposure notification apps, particularly ones put together by the government, were not going to be an easy sell to the general public,” Stover says.

COVIDWISE has also had some recent developments. On Dec. 9, it joined the Association of Public Health Laboratories’ National Key Server, allowing for notifications across Washington, D.C., and all 15 states that have similar apps.

“Most states that have followed [Virginia’s lead] with Apple and Google notification apps are on this national key server,” Stover explains. “Virginia was not, because we were the first to go live and there was no such thing when we started.”

There’s also an express version on the horizon that will issue a simple push notification on iPhones.

“We’re hoping to have it by the end of the year, so that anyone who does not already have COVIDWISE would then have the ability to activate COVIDWISE Express on an iPhone.”

These developments come against some bleak pandemic news.

Four of the 10 deadliest days in American history took place last week, ranking among the likes of the Battle of Antietam and the September 11 attacks, according to CBS News. On Dec. 9, Virginia reported a record daily increase of 4,398 new cases.

For those who haven’t downloaded the app, Stover has a message: “It’s more than just about you. It’s about protecting you and your community, and it’s a really simple way to do that.” 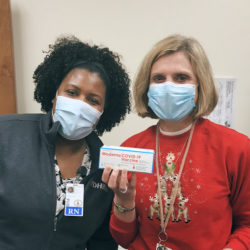 140,000 doses received this week are going to long-term care facilities and hospitals 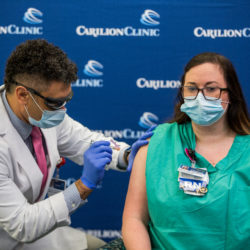