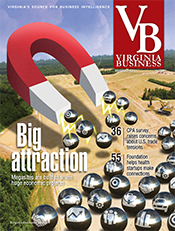 Managing Editor Jessica Sabbath won a second-place award in the news-writing portfolio category for a package of stories on the growth of megasites in Virginia and the potential expansion of gambling in the commonwealth. The portfolio also included a profile of John Lawson, executive chairman of W.M. Jordan Co. in Newport News.

Freelance writer Bob Burke received a second-place award for a package of stories in the health, science and environmental writing category. His stories looked at the impact of Medicaid expansion in underserved areas of the state, rural broadband and the Focused Ultrasound Foundation in Charlottesville.

Freelance writer Richard Foster won a third-place award in the arts writing category for his story on the economic impact of the arts.

The VPA awards were announced Saturday evening at a banquet at the Hilton Norfolk The Main hotel. Journalists from Iowa judged this year’s contest.