Deputy Editor Rich Griset placed first in the news writing portfolio category for three stories he wrote in 2020, including: Firing up Fairfax, a profile of Fairfax County that focused on its business prospects in the early months of the COVID-19 pandemic; (Re)open season, which turned the spotlight on businesses across the state struggling to stay afloat during the state’s shutdown; and The new normal, a look at how commercial real estate firms adapted offices to keep employees safe as they returned to work mid-pandemic.

Art Director Joel Smith won first place for his front cover designs in the August, October and November 2020 issues — hailed by the judges as “very creative covers that go beyond the usual look of business publications.” Smith assembled a photo illustration for the November 2020 cover, depicting Virginia’s potential future as a commercial casino home; October’s illustration of a cartoon cardinal with a Trumpian hairdo was art directed by Smith and illustrated by Chris Danger; and August’s cover photo of Busch Gardens Williamsburg President Kevin Lembke was shot by Caroline Martin.

Virginia Business Editor Richard Foster received second place for headline writing, which the judges said were “strong and clean plays on words.” Among Foster’s submitted headlines were “The New Dominion” atop the January 2020 cover story about Virginia Democrats retaking control of the General Assembly after nearly 30 years. Griset snagged third place in business and financial writing for his August 2020 story (Re)open season, which judges praised for providing a broad account of “how businesses are, and aren’t, reopening in the time of virus.” 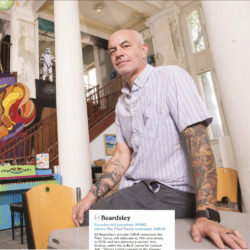