The company will make upgrades within its 500,000-square-foot facility in Martinsville to increase distribution capacity and speed.

“VF Corp. has thrived in Henry County for nearly 20 years, and we are thrilled to see the company continue to invest in the commonwealth,” Northam said in a statement. “Virginia’s strong outdoor recreation economy supports the growth of companies like VF Corp. We look forward to the company’s continued success here in the commonwealth as our ecotourism industry grows.”

VF Corp. owns a family of outdoor, active and workwear brands including Vans, The North Face, Timberland and Dickies. The company, which has operated in Henry County since 2003, reported $9.2 billion in revenue for fiscal year 2021, sells products in more than 170 countries and produces 300 million units of apparel, footwear and accessories each year.

“We’ve proudly operated our distribution center in Martinsville for 18 years, and we know that continuing to invest in Martinsville is the right choice given its location and committed employees,” Cameron Bailey, VF Corp. executive vice president of global supply chain, said in a statement. “The planned investments in this facility, from enhanced technology to improved distribution equipment, as well as the 82 new full-time positions, will help deliver our products to our consumers in a more efficient and prompt manner.”

The Virginia Economic Development Partnership worked with the Martinsville-Henry County Economic Development Corp. and the Virginia Office of Outdoor Recreation to secure the project, for which Virginia competed with California and Pennsylvania. Northam approved a $225,000 grant from the Commonwealth’s Opportunity Fund to assist Henry County. The company is eligible to receive benefits from the Virginia Enterprise Zone Program, which is administered by the Virginia Department of Housing and Community Development. The VEDP’s Virginia Jobs Investment Program will provide funding to support employee recruitment and training activities. 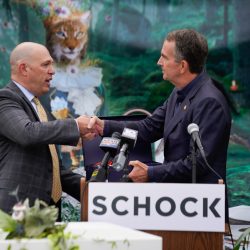