Democrat has 3% lead, within margin of error

The Republican and Democratic candidates for Virginia governor are in a virtual tie, a new poll by the L. Douglas Wilder School of Government and Public Affairs at Virginia Commonwealth University reported Friday.

Democratic former Gov. Terry McAuliffe is polling ahead at 40%, while Republican Glenn Youngkin, former co-CEO of The Carlyle Group, polled at 37% among likely voters.  McAuliffe’s 3% lead falls within the poll’s 5.23% margin of error, according to the Wilder School. Another 23% of voters polled said they are undecided or unwilling to vote for one of the two major party candidates. Conducted during Aug. 4-15,  the poll questioned 823 Virginia adults about their voting plans. 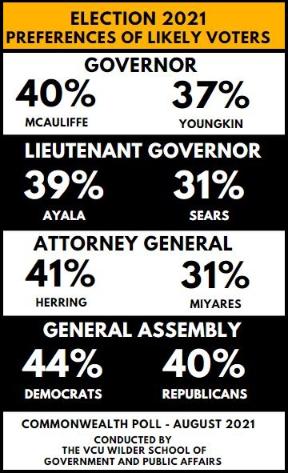 “As of this survey, there have been no debates between the candidates for governor or lieutenant governor. The gubernatorial candidates are in a virtual dead heat,” former Gov. L. Douglas Wilder said in a statement. “That could change once positions are taken on the issues. The lieutenant governor’s race showing the largest difference could also be affected. The attorney general race has 19% of the voters unwilling to vote for either candidate. Added to the 10% undecided, [that] leaves one-third of the voters who could tighten that contest. How the pandemic affects turnout and enthusiasm energizes voters should be of utmost concern.”

With all 100 state delegate seats up in the air this fall, poll respondents were split when asked which party they would rather see in control of the General Assembly. Democrats received 44% to maintain control, while 40% of those surveyed said they’d rather see Republicans regain power of the state legislature.

The regional breakdown held no big surprises, with McAuliffe holding a large lead in Northern Virginia (51% to Youngkin’s 24%) and Youngkin dominating in the northwestern and Southwest regions of the state with 52% to McAuliffe’s 32%. In Southern and Central Virginia, including the Richmond and Petersburg areas, Youngkin has a slight lead of 34% to McAuliffe’s 32% share, although 33% of voters polled in those regions said they are undecided. In the Hampton Roads region, 42% of voters said they support McAuliffe, and 37% are for Youngkin.

Gov. Ralph Northam, entering the final months of his four-year term, received strong approval numbers for his handling of COVID-19, with 57% of those polled saying he did a good job, although only 47% said he handled health care and racial inequities well.

So far, the two gubernatorial candidates have accepted only two debate invites on the same stage, although Youngkin turned down three opportunities that McAuliffe agreed to, and McAuliffe rejected an invite at Liberty University that Youngkin accepted. The two scheduled debates are set for Sept. 16 at the Appalachian State School of Law and Sep.t 28 for the NOVA Chamber of Commerce/NBC4 debate in Northern Virginia. 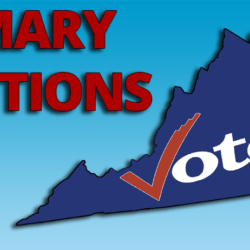