VCU’s L. Douglas Wilder School of Government and Public Affairs released its second Virginia gubernatorial poll results Monday, indicating that while McAuliffe has 43% of likely voters’ support and Youngkin only 34%, the attorney general and lieutenant governor races have gotten closer in the past month.

“Our recent poll relative to the governor’s race and statewide elections showed interesting results,” former Virginia Gov. L. Douglas Wilder said in a statement Monday. “Neither McAuliffe nor Youngkin had 50% support. The increase in the undecided and those unable to commit for either is noteworthy. The poll was taken prior to any debates. How the candidates show the people what they propose dealing with the pandemic and its effects are obvious concerns. The narrowing of the lead by the Democratic candidates in the lieutenant governor and attorney general races and increased ‘undecided’ shows ‘the jury’ may be out awhile longer.” 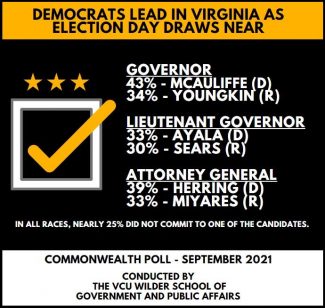 The poll of 811 adults in Virginia was conducted Sept. 7-15 with a margin of error of 5.35%, which increases to 6.93% when considering likely voters only. In the attorney general race, incumbent Herring has a six-point lead over Republican Miyares, 39% to 33%, and Ayala appears to have lost ground against Sears, with a 33% to 30% lead that falls within the margin of error. However, 20% of voters said they remain undecided or unwilling to vote for either lieutenant governor candidate.

It’s a similar story for the two major-party governor contenders; 23% of those polled said they are still undecided or are unwilling to vote for either candidate. A third-party candidate, Princess Blanding, is considered a possible spoiler for McAuliffe among progressive Democratic voters. Blanding — the sister of Virginia teacher Marcus-David Peters, who was killed by a Richmond police officer in 2018 — was not included in Thursday’s first gubernatorial debate, but according to a Youngkin campaign internal poll cited by FiveThirtyEight, her presence could help Youngkin beat McAuliffe.

A poll of 907 likely voters conducted Sept. 7-13 by The Washington Post and GMU’s Schar School of Policy and Government showed McAuliffe with a much narrower lead, 50% over Youngkin’s 47% — within the margin of statistical error. Mark Rozell, the Schar School’s dean, called the race a “toss-up” in the Post.

Meanwhile, President Joe Biden’s falling approval numbers may also hamper McAuliffe’s campaign for a second, nonconsecutive term. The Wilder School poll shows 46% of Virginians approving of the job the Democratic Biden is doing, down five points from August — likely influenced by factors such as the U.S. military’s turbulent exit from Afghanistan and increasing disagreements over the Biden administration’s coronavirus responses, including vaccine-or-testing mandates for companies employing 100 or more workers.

In state delegates’ races, Democrats maintained a slight edge over Republicans in the VCU poll, with 43% of respondents saying they’d like the party to retain control next year. Five percent were undecided, and 39% wanted Republicans to regain power in the House.  Democrats hold a 55-seat majority in the House of Delegates, and all 100 seats are up for grabs.

Democrat has 3% lead, within margin of error

McAuliffe leads with 50% over Youngkin's 41%