A VCU Health liver specialist and gastroenterologist is leading clinical trials for a possible drug treatment for COVID-19 patients.

VCU Health is among a handful of institutions in the United States and in other countries conducting trials on remdesivir, which was developed by Gilead Sciences Inc., a California biotech company. The first trials in this country began in February as part of the U.S. Food and Drug Administration’s fast-tracking of its drug-testing protocol to address the coronavirus.

Remdesivir yielded positive results on COVID-19 patients in China, which led to the FDA’s decision to allow U.S. researchers to jump to Phase 3 testing — i.e., testing on human patients. Normally, trials begin with tests on healthy volunteers and later progress to people with an illness, but the outbreak has prompted a fast-tracking of drug trials that could lead to successful treatment of COVID-19.

This is how the VCU trial works:

A patient must have a certified positive test for COVID-19 and be sick enough to be in the hospital, Sanyal said, with documented fever and pneumonia. If the patient requires additional oxygen, they are designated as having a severe case; if the patient does not need oxygen, they are considered moderate.

At the VCU Health System in Richmond, the patients in the trial are divided into groups: some moderate and severe patients are given remdesivir intravenously for five days and others for 10 days; the other moderate patients are not given the drug, to provide a comparison in the study.

The objectives, Sanyal says, are to see if the five-day and 10-day treatments yield similar results, whether researchers see any improvement among drug-therapy patients, and if the drug reduces a severe patient’s chance of death.

About 10 days from now, Sanyal expects to have a better idea of the effect of the drug, and he will submit his data to Gilead. “These trials are pretty close to being fully enrolled globally,” Sanyal said, and “a month after the last patient is enrolled, then the clock starts ticking.”

Gilead should have a full analysis of the data within two or three months, Sanyal said, which will be sent to the FDA for possible approval of the drug.

Although he specializes in the liver, Sanyal has conducted numerous clinical trials over the years, including some with Gilead. He performs research at the VCU Massey Cancer Center and trains faculty in research at VCU’s C. Kenneth and Dianne Wright Center for Clinical and Translational Research, which oversees VCU’s clinical trials, backed by a $21.5 million National Institutes of Health grant.

Watching the early days of the COVID-19 spread in the U.S., Sanyal said he expected Virginia would not be spared — and he was worried that there were no medications approved to treat the virus.

He contacted Gilead, which designated VCU as one of five locations where clinical trials would be initiated. The tests started at VCU this week — within five or six days after the conversation, Sanyal said. “It was remarkable.” Typically, drug trials take much longer to launch, he noted.

“Our goal is to keep enrolling patients,” Sanyal said. He encourages anyone who may have COVID-19 to talk to their doctor, who can then fill in the patient’s information in an online portal. There are several hurdles any patient included in the trial must pass.

“We have to take into consideration whether the patient has COVID-19, whether they’re likely to benefit from the drug,” Sanyal says. If a patient has significant kidney disease or high liver enzymes, he can’t include the person in the trial. Also, Sanyal must consider whether a patient can be safely transported to VCU and if there is an isolated bed available at the hospital, which is often 90% to 100% full in normal times.

“That requires coordination and effort,” he says. “We understand their anxiety, and we sympathize. We really encourage patients to talk to their doctor.”

Meanwhile, Sanyal is staying busy with his regular duties, which don’t stop because of the pandemic. “I still have my day job, to take care of my liver patients here.”

Testing will be primarily administered to hospitalized patients with severe symptoms. 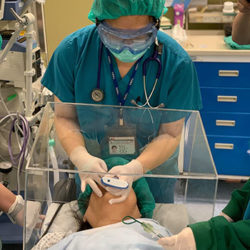 Boxes protecting physicians during intubation will be distributed statewide.