The story’s been very different in Rockingham County and Harrisonburg, which are also major poultry producers. Even though the valley localities have seen similar numbers of cases and deaths to Accomack, not all of the 5,200 poultry plant employees in Rockingham and Harrisonburg have been tested for coronavirus, despite concerns raised by activists and plant workers.

In May, the Harrisonburg-based Justice for Poultry Workers wrote an open letter to Gov. Ralph Northam, urging him to order tests for all Shenandoah poultry workers. “The health of our poultry workers, our economy and our community are at stake,” the letter says.

Virginia Department of Health officials say one major difference between the two regions is the lack of medical resources on the Eastern Shore, which has just one critical-access hospital, with only 30 beds. The Shenandoah Valley has two regional hospitals with at least 200 beds each.

“As cases increased and need for hospitalizations also increased, there was significant concern that the health care system would be overwhelmed if immediate action was not taken [on the Eastern Shore] to slow the trajectory of the outbreak,” says VDH spokesperson Cheryle Rodriguez. “The situation in the Shenandoah Valley did not escalate to this point.”

Additionally, due to a lack of available housing and the fact that many hail from Haiti, Eastern Shore plant employees live close to each other and commute together — risk factors for contracting coronavirus, says Travis Carter, business development manager for the Shenandoah Valley Partnership, who has worked in the poultry industry in both the valley and Eastern Shore.

The valley’s poultry workforce is more diverse, however, speaking upwards of 10 languages and spread out across the area, Carter adds.

Hobey Bauhan, president of the Virginia Poultry Federation, a statewide trade association, says valley poultry plants — including George’s Inc. and Shenandoah Valley Organic in Harrisonburg, and Cargill in Mount Crawford — have instituted safety measures such as staggered break times, providing masks and posting health notices in multiple languages. Workers undergo frequent temperature checks and the companies comply with CDC and OSHA guidance around the virus, adds Bauhan. (The companies did not respond to requests for comment.) 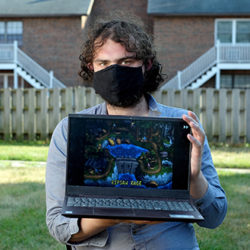 Those who have received PPP, EIDL funding can now apply