Valley of the entrepreneurs

The Shenandoah Valley has long been recognized as fertile ground for agricultural endeavors, but it’s now being seeded to grow an entirely different kind of crop — entrepreneurs.

During the past few years, local and regional governmental bodies, nonprofits, and private and educational organizations in the valley have been coordinating efforts to create an entrepreneurial ecosystem. They aim to provide regional startups with all the training, advice, contacts and access to funding needed to turn kernels of good ideas into successful, home-grown businesses.

As director of technology innovation and economic development at James Madison University, Mary Lou Bourne is intimately involved in this informal system, which she calls “a coalition of the willing.” Bourne also is executive director of James Madison Innovations Inc., a nonprofit corporation for intellectual property management and licensing for inventions developed by JMU researchers.

The university does not lead the regional entrepreneurship effort, she stresses, but plays an “additive” role. However, “additive” hardly does justice to the list of organizations based at JMU that are dedicated to helping fledgling businesses in the valley. Among them are the Shenandoah Small Business Development Center, one of 27 such centers in the commonwealth that provide free professional consulting and training for new and small businesses, and Virginia Is for Entrepreneurs, which helps startups find financing.

Outside JMU’s campus, Harrisonburg’s economic development department holds 10-week boot camps several times a year to teach entrepreneurs essential skills such as marketing and bookkeeping. The Harrisonburg-Rockingham Chamber of Commerce and Harrisonburg Downtown Renaissance, which promotes businesses in the central city, both offer training classes as well. The agencies collaborate to avoid duplication of services and to eliminate gaps in assistance programs.

“People start a business because it is their passion,” says Harrisonburg Chamber President and CEO Chris Quinn. “This [training] is the back-end stuff.”

Elsewhere in the valley, there are plenty of other options for entrepreneurs seeking support. In Staunton, Shenandoah Community Capital Fund hosts a Business Bootcamp three times a year, says Anika Horn, SCCF’s director of marketing and ecosystem building. The eight-week virtual class helps budding entrepreneurs develop business skills and evaluate the viability of their ideas.

Nearby Waynesboro offers extensive help for startups, too, mostly online, and the city’s Grow Waynesboro program recently received a $45,000 Community Business Launch grant from the state to expand its efforts. It plans to use some of the funding to hold a business pitch competition next year, with winners receiving grants, marketing support, customized training, mentorships and technical assistance.

Peter Denbigh is an example of someone developing the entrepreneurial ecosystem the valley is trying to nurture. He found success marketing a party game online, and he and his former wife, Alison Denbigh, co-founded a coworking space, Staunton Innovation Hub, in early 2017. The hub offers coworking and meeting spaces and private offices, as well as business programming and other opportunities for networking and sharing experiences that can be so important for budding entrepreneurs, Peter Denbigh says. For example, Shenandoah Community Capital Fund is headquartered in the hub and offers an accelerator program, Startup Shenandoah Valley (S2V).

About 110 companies have office space or are headquartered in the 30,000-square-foot Staunton Innovation Hub. Denbigh is looking to expand the entrepreneurial network he’s building by opening a similar size Harrisonburg Innovation Hub in late 2023.

Andrea Estep’s Harrisonburg women’s clothing and accessories shop, Charlee Rose Boutique, is another valley entrepreneurship success story. Estep started the business in her garage and now has a downtown storefront. “The community in Harrisonburg is like none other that I’ve experienced,” she says. “The support helped me survive through the pandemic.”

During the pandemic, Kirsten Moore also bucked the odds to start a coworking space in Harrisonburg, the Perch at Magpie. It has about 100 tenants housed in a 7,000-square-foot space atop her other new business, the Magpie Diner restaurant and bakery. “You have all of the right cheerleaders to walk you through the process” of building a business in the area, Moore says. “You can just walk into city hall and get your questions answered.”

Moore was fortunate to find private investors for her ambitious plans, which include a wine bar and retail and event space in a nearby building, but for many startups, securing capital financing is the biggest obstacle to starting and expanding their businesses.

Business loans from banks are sometimes hard to get, unless an entrepreneur has a big nest egg, and the valley’s lack of population density — the very demographic that makes the region appealing to so many would-be entrepreneurs — unfortunately correlates with a lack of available venture capital.

Only two local agencies (other than banks) offer substantial funding to valley startups.

One is Shenandoah Valley Angel Investors, a network of private funders capable of lending $50,000 to $300,000 to launch new businesses. Since its founding in 2015, facilitated by JMU’s Bourne, the fund, which is independent of the university, has invested $8.1 million in 23 companies.

The other major source of capital in the valley is Shenandoah Community Capital Fund in Staunton. Since it gave out its first loans in 2009, Horn says, the fund has invested $1.6 million to fund 108 businesses and support more than 450 others. That funding has come in the form of loans of $5,000 to $50,000.

Localities — including Waynesboro, Buena Vista and Augusta County — also make loans to small businesses, averaging about $15,000 each. Brian Shull, executive director of Harrisonburg Economic Development, says his agency can offer loans up to $25,000 to help entrepreneurs who are “not quite bankable yet.” So far, his agency has distributed 22 loans, adding up to $450,000.

Some other options have arisen recently to aid minority business owners, who typically have a harder time than white entrepreneurs in securing capital. In the first half of 2021, funding to U.S. Black startup entrepreneurs hit a record $1.8 billion but accounted for only 1.2% of the $147 billion in venture capital invested in all U.S. startups during the same period, according to a report by Crunchbase.

In Lexington, the all-volunteer Walker Program was started in 2020 to assist businesses owned by people of color in Buena Vista, Rockbridge County and Lexington.

In addition to its own program teaching the nuts and bolts of doing business and offering advice on issues such as trademarks and patents, Walker has made 15 business grants between $5,000 and $25,000 each, program coordinator Gabrielle J. Cash says. Thanks to Walker funding, three Black-owned businesses now are operating in downtown Lexington, where until recently, there were none.

Photographer Tasha Coleman received a Walker grant of $10,000 to help her secure a studio space in Buena Vista for her business, Tasha Lamar Photography & Films. She is grateful for that assistance, but she still has not been able to get up and running, because she needs more funding for equipment.

“Finding other loans to help furnish the studio has been very difficult,” Coleman says.

“Raising capital in the valley can be hard,” Denbigh says.  Organizations there “provide 101- and 201-level resources for entrepreneurs, but we need to get into 301 and 401 upscaling. That will be the tipping point when the money starts coming in.”

To help more young businesses reach that tipping point, Shenandoah Community Capital Fund offers its S2V accelerator program, which more than 40 entrepreneurs have attended since it was established in 2020. Stephanie Auville Duncan of Harmony Harvest Farm in Weyers Cave is one of them.

Duncan, her sister, Jessica Hall, and their mother, Chris Auville, have been in the cut-flower business since 2013. The women started out by supplying flowers for weddings and other local events, and a few years later expanded into wholesale shipping to florists. Whole Foods stores up and down the East Coast started stocking their flowers, so business was great. Then, COVID-19 arrived, decreasing the need for flower arrangements, so florists and Whole Foods stopped buying from Harmony Harvest.

But with the help of the accelerator program, plus advice from Virginia Department of Tourism, Augusta County and Shenandoah Valley Partnership, Harmony Harvest was able to make a pandemic pivot and come up with a new business plan focused on shipping directly to customers. In 2020, its online sales increased by 1,600%.

The accelerator program, Duncan says, was “paramount to understanding the best way to grow” the family’s business, which has expanded to include agritourism.

This summer, Harmony Harvest began a pick-your-own-flowers operation and opened a retail store on the farm, a picturesque 20-acre property in Augusta County. Hall’s related business, Floral Genius, operates online and from the farm, too. Its pin- and cup-style flower holders called “flower frogs” got a welcome boost when Martha Stewart used them in a how-to video about flower arranging.

The bottom line, however, is that until more entrepreneurs like Duncan, Auville and Hall find ways to take their enterprises to the next level, finding financing is going to remain a sticking point for small business development in the valley.

The entrepreneurial ecosystem will be there, though, doing it’s dogged best to help them.

Shenandoah Valley at a glance

Settled in the 1700s, the approximately 140-mile-long Shenandoah Valley lies between the Blue Ridge and the Allegheny mountains. Agriculture remains a key industry for the region, which was known as the breadbasket of the Confederacy during the Civil War. Other notable industries include manufacturing, especially of food and beverages, and logistics. Bridgewater College, James Madison University, Mary Baldwin University, Virginia Military Institute, and Washington and Lee University call the region home.

*Based on Shenandoah Valley Partnership estimates

JMU student and alumni entrepreneurs get boost from program 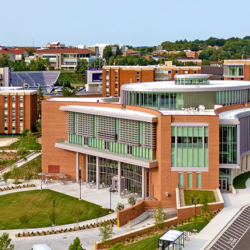