More than 11,000 Virginians filed initial jobless claims last week — a decrease of nearly 4,000 claims from the previous week, according to the Virginia Employment Commission.

The number of initial claims filed during the Aug. 22 filing week fell to near the average weekly volume in 2009, according to the VEC. However, 249,745 people in Virginia remained unemployed last week. This is a 5.8% decrease from the previous week, but 230,488 higher than the 19,257 continued claims from the same period last year. People receiving unemployment benefits through the VEC must file weekly unemployment claims in order to continue receiving benefits.

“[Claims] had leveled off in mid-August before picking up recent months’ declining trend in the most recent filing week,” VEC Senior Economist Timothy Aylor said in a statement. “The continued claims total is mainly comprised of those recent initial claimants who continued to file for unemployment insurance benefits during the COVID-19 pandemic.”

Since the pandemic began, more than 1.1 million Virginians have filed initial claims for unemployment.

Below are the top 10 localities, listed by number of initial unemployment claims, for the week ending Aug. 22:

Nationwide, the advance figure for seasonally adjusted initial claims for last week was 1.006 million, a decrease of 98,000 from the previous week’s revised level, according to the U.S. Department of Labor. There were 176,867 initial claims during the same week last year. 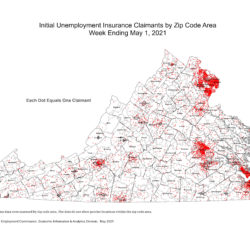