Virginia saw a 13.1% drop in the number of initial jobless claims filed last week compared to the previous week, but unemployment remains high across the state, according to figures released by the Virginia Employment Commission on Thursday.

“Elevated levels in recent weeks may have, in part, reflected seasonal spikes in layoffs often seen after the holidays, as well as reapplications for benefits following the government’s renewal of supplemental benefits until March 14 as part of the latest stimulus package,” according to the VEC.

Last week, 67,298 Virginians remained unemployed, a 5.4% increase from the previous week and 45,637 higher than the same period in 2020. People receiving unemployment benefits through the VEC must file weekly unemployment claims in order to continue receiving benefits. Most of the claims that had a self-reported industry were in the hospitality, administrative, waste service, retail and health care industries, according to the VEC.

Below are the top 10 localities, listed by number of initial unemployment claims, for the week ending Jan. 23:

Nationwide, the advance figure for seasonally adjusted initial claims for last week was 847,000, a decrease of 67,000 from the previous week’s revised level, according to the U.S. Department of Labor. There were 229,002 initial claims during the same week last year. 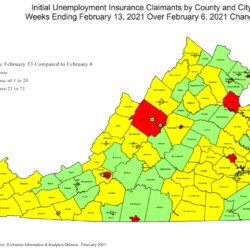