Last week saw an increase of 1,291 initial jobless claims from the previous week, while continued claims totaled 40,225, a decrease of 2,653 claims from a week ago.

Nationwide, the advance figure for seasonally adjusted initial claims last week was 364,000, a decrease of 51,000 from the previous week’s revised level, according to the U.S. Department of Labor. There were 1,426,894 initial claims during the same week last year. Virginia saw the fifth-largest one-week increase in initial claims in the country last week, as many states reported decreases in claims. 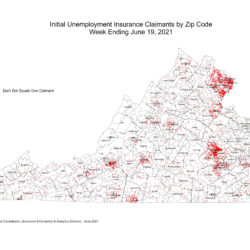