After a 300% surge in new unemployment claims the previous week, the state saw numbers return to relatively normal levels in the filing week ending Sept. 25, the Virginia Employment Commission reported Thursday. Last week, 8,717 people filed initial claims, a decrease of 7,245 from the week before.

The majority of the claimants who filed for benefits last week reported being in these industries: health care and social assistance; administrative and waste services; retail; and accommodations/food service. The regions of the state that have been most impacted continue to be Northern Virginia, Richmond and Hampton Roads. Nationwide, the advance figure for seasonally adjusted initial claims last week was 362,000, an increase of 11,000 from the previous week’s revised level. There were 732,912 initial claims in the comparable week last year.

Meanwhile, a Joint Legislative Audit and Review Commission report said earlier this month the VEC has “paused” collection of overpayments to unemployed claimants as it sorts through more backlogs of disputed claims and appeals, the Richmond Times-Dispatch reported. The agency has been under tight scrutiny this year as it was under court order to address a backlog of earlier claims by Labor Day. Although the VEC was able to meet that deadline, other disputed claims built up during that period. Also, WTVR 6 reported that the VEC’s launch of an updated claims system, set for Oct. 1, has now been postponed to November. 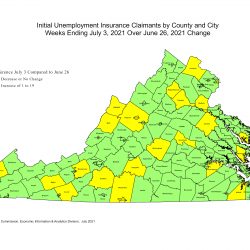