For the filing week ending Aug. 21, the state recorded 11,923 new jobless claims, down 4,670 from the previous week. Continued claims totaled 37,075, up 1,994 from last week. New jobless claims had risen in the two weeks preceding this one.

Compared to the same week last year, continued claims were 85% lower than the 249,745 claims in that week, while initial claims were about 4.3% higher than a year ago, when new claims totaled 11,436.

The VEC has started notifying people who are receiving the benefits that all federal unemployment COVID-19 benefits will come to an end on Sept. 4. That includes the $300 a week supplemental unemployment benefit.

VEC is under court order to get through a backlog of 92,000 cases by Labor Day, but has filed for dismissal of the lawsuit, saying it has resolved 98% of the disputed unemployment claims.

The majority of the claimants who filed for benefits last week reported being in these industries: health care and social assistance; administrative and waste services; retail; and accommodations/food service.

Nationwide, the advance figure for seasonally adjusted initial claims last week was 353,000, an increase of 4,000 from the previous week’s revised level. There were 814,639 initial claims in the comparable week last year. 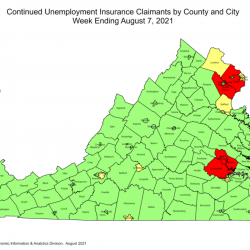 Initial claims had been hovering around 6K 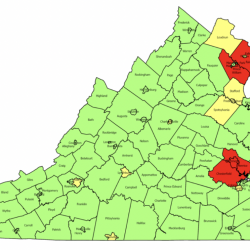 Initial claims are higher than this week in 2020