Home News Va. layoffs and discharges down in June

Virginia companies put the brakes on layoffs in June, even as workers continued to seek new opportunities, refueling the Great Resignation.

Virginia had 28,000 layoffs and discharges in June, a decrease of 13,000 from May, according to U.S. Bureau of Labor Statistics’ Job Openings and Labor Turnover Survey (JOLTS) data released last week. That marked about 25% fewer involuntary separations by employers compared with June 2021. Industries that saw the largest decreases in layoffs and discharges nationally were wholesale and trade, finance and insurance, and the federal government.

However, at the same time, an estimated 114,000 Virginia workers quit their jobs in June, up 4,000 from May and 8.6% higher than in June 2021. Nationally, quits increased among education workers for state and local government (+14,000), while the construction industry saw a big decrease in quits (-51,000). According to the BLS, the number of quits, which includes workers who quit to take new jobs, can be a leading indicator of wage trends.

The rate of Virginians quitting jobs is up a third from five years ago.

For June, there was less than one employed worker per job opening in the commonwealth, holding steady over the past few months, according to the Virginia Employment Commission. The peak was in February 2010 when it peaked at 4.4 unemployed workers per job opening. In April 2020, it was 3.3 workers. 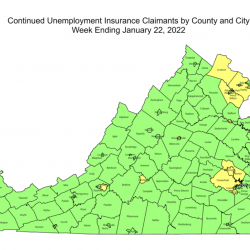 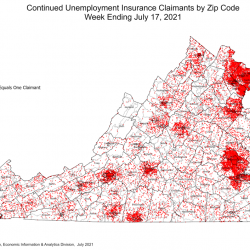