Virginia hotel revenues in January were 6.5% below January 2019 levels, according to data released Monday by STR Inc., a CoStar Group division that provides market data on the U.S. hospitality industry.

During the same period, hotel rooms sold decreased by 4% compared with 2019 levels. The average daily rate (ADR) paid for hotel rooms last month decreased by 2% to $94, while the revenue per available room (RevPAR) fell to $42, 7% lower than its 2019 level.

Hampton Roads hotels’ revenues were 10% higher than their January 2019 totals. Within the region, Virginia Beach saw a 22% increase from its January 2019 revenues. Williamsburg was the only submarket to see a decline — 3%.

In Northern Virginia, hotel revenue was 33% lower than its January 2019 level. The Roanoke market saw a 4% decline, and the Bristol, Virginia, market a 3% drop.

In Richmond, hotel revenue increased 10.4% from its 2019 levels. The uptick in Richmond is likely due to Gov. Glenn Youngkin’s inauguration, as well as the fact that the General Assembly is in session, Terry said.

The number of rooms sold last month decreased by 23% in Northern Virginia, compared to the number sold in 2019. The Bristol, Virginia, market had a 13% decrease, Williamsburg a 9% decrease, Newport News/Hampton an 8% drop, and Roanoke a 7% decline.

Rooms sold increased by 11% in the Norfolk/Portsmouth submarket, and Richmond had a 6.2% increase in rooms sold. 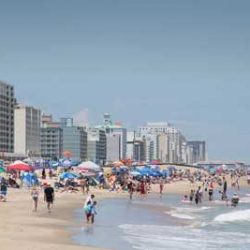