Hampton Roads is seeing a slowdown, possibly due to governor's Aug. 1 order

During the week of Aug. 16-22, hotel revenues decreased by 42% and rooms sold declined by 31% compared to the same week last year, but this marks a small improvement from the previous week, which saw a 44% decline in revenue and 32% decrease in rooms sold, according to the CoStar Group division that provides weekly market data on the U.S. hospitality industry.

Hotel revenue and rooms sold across the state were still well below last year’s rates, but Hampton Roads continues to hold on to the highest occupancy rates among the nation’s top 25 markets, with 61.2% occupancy last week and 64.2% occupancy since the week of June 21-27. Its RevPAR level, however, fell to third place in the nation last week at $67.97, behind San Diego and Los Angeles. It maintains first place over the last four weeks, though, with an average of $72.42.

“Performance of the hotels in Hampton Roads during the current week was in general worse than last week,” Professor Vinod Agarwal of Old Dominion University’s Dragas Center for Economic Analysis and Policy said in a statement. “It appears that additional restrictions imposed in Hampton Roads, due to rising infection cases, have started to affect the recovery for Hampton Roads hotels.”

On Aug. 1, the governor enacted more restrictions on Hampton Roads restaurants after the region saw a spike in the number of COVID-19 cases, which was attributed to people gathering in large numbers at restaurants, bars and house parties. Gov. Ralph Northam ordered no gatherings larger than 50 people, restaurants cannot sell or serve alcohol after 10 p.m., and they must close by midnight until the order is rescinded.

In recent weeks, the number of new cases has gone down in parts of the region, including Virginia Beach and Norfolk, but Portsmouth, Chesapeake and the Western Tidewater Health District continue to report positivity rates above 10%. 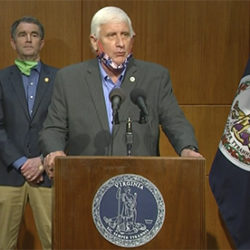