Virginia home sales in October decreased by 30.2% from the same time last year, the largest year-over-year sales decrease in more than a decade, according to a Virginia Realtors report released this week.

In October, 8,828 homes sold in Virginia, 3,828 fewer than in October 2021. Nationally, home sales declined for the ninth straight month in October and were 28.4% lower year over year.

Last year was a busy year for home sales, which could partly explain the sharp decrease, according to Virginia Realtors. The slowdown is also partly a result of climbing mortgage rates, which rose above 7% in October. The average rate on a 30-year fixed mortgage jumped nearly half a percentage point last month.

On average, Virginia homes spent 29 days on the market in October, four days longer than the average in October 2021.

Virginia had approximately $4 billion of sold volume in October, about $1.5 billion less volume than a year ago, which is a 26.5% drop in volume.

The state’s inventory of available homes on the market is growing as a result. At the end of the month, there were 19,523 active listings in Virginia, 764 more than a year ago — an increase of slightly more than 4%.

“We’ve been reporting on Virginia’s waning inventory of available homes for years now,” Virginia Realtors Chief Economist Ryan Price said in a statement. “In October, we saw the largest inventory buildup the state’s housing market has had in more than eight years.”

Despite the growth in supply, inventory remains tight, continuing to keep home prices higher in some markets. The statewide median sales price in October was $365,000, up $15,000 from October last year.

More than 90% of counties and cities in Virginia have had a higher median sales price from January through October this year compared to the same period last year. The largest median price increases through October were in the Shenandoah Valley, Central Virginia and the Eastern Shore. 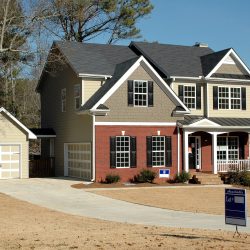 Rate increases may not be over, economists say