The number of quits — voluntary separations initiated by the employee — in Virginia rose 12,000 to 123,000, the highest level since the record set in April. The Virginia quits rate increased to 3.1% and neared the April peak of 3.3%.

Across the U.S., the number of quits rose to a series high of 4.4 million and increased in the arts, entertainment and recreation industry, state and local government education and other services. The September quits rate hit a high of 3%.

“September’s JOLTS indicators suggest that Virginia employer demand for workers remained at highly elevated levels as the number of job openings reached their highest level in the past twenty years and the number of quits was also near record highs, indicating that labor markets remained in an unusual state of disequilibrium,” according to the report. “At the same time, hiring ramped up in September in the commonwealth, which could indicate that progress has begun being made in alleviating the labor shortage that has been seen across the nation over the last year.”

The hires-per-job-openings ratio (HPJO) was 0.6 in both Virginia and the U.S. The HPJO is a proxy for time to fill positions or the efficiency in filling open jobs in a labor market. The HPJO at the nonfarm-industry level has decreased steadily since the end of the Great Recession, and by January 2015, the ratio was regularly below 1.0, indicating less efficiency. 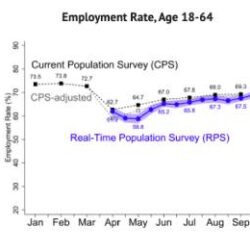 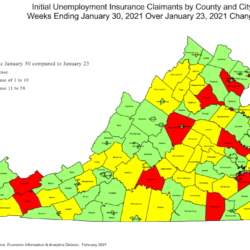