On Friday, the Virginia Department of Health announced that 604 Virginians have tested positive for the novel coronavirus, up from 460 the previous day. It’s the largest one-day jump in confirmed cases since COVID-19 was first discovered in Virginia 20 days ago. As many as 18 Virginians may have died from the virus, as of Friday. On Thursday, the United States became the nation with the most COVID-19 cases in the world, surpassing hotspots like China, Italy and Spain.

Northam. other state governors and Washington, D.C., Mayor Muriel Bowser held a conference call Thursday with federal officials in which they told Trump and Vice President Mike Pence that the states need federal leadership in marshaling more medical equipment, testing kits and protective gear for health care workers. “We’re all out there bidding literally against each other,” the governor said, noting that Virginia’s state government is competing against its own hospital systems, other states and the federal government to purchase personal protective equipment (PPE) for medical workers and other in-demand medical equipment such as ventilators and COVID-19 test kits.

“The governors on that call repeatedly said that production and distribution of PPE really must be managed at the federal level. We strongly urge the president to use the Defense Production Act to ramp up production of PPE. There is no time to waste,” Northam said. (During that call, Washington Gov. Jay Inslee made headlines for responding to Trump’s comment that the federal government was primed to be a “backup” for states in crisis by saying, “We don’t need a backup. We need a Tom Brady.”)

Northam stated earlier this week that the number of confirmed cases is likely to grow in Virginia as more testing kits become available, as well as from community spread of the virus. Due to the shortage of COVID-19 test kits, it is difficult to ascertain how many people actually have the virus, as some people with COVID-19 only manifest mild to moderate symptoms, which do not meet thresholds for testing.

During Northam’s coronavirus news conference Friday, Virginia Secretary of Finance Aubrey Layne said that Virginia expects to receive $3.3 billion in federal funds from the $2 trillion CARE Act, which was signed by Trump on Friday. Layne said that $1.8 billion of the aid will be directed to the state government to address COVID-19-related public health costs, and $1.5 billion will be allocated to localities. The General Assembly still plans to reconvene April 22 in Richmond, Northam said, and discussions are ongoing about new state spending related to the COVID-19 crisis.

Northam also said he is working with Maryland Gov. Larry Hogan and Bowser to request a federal testing site in the D.C. metro area, especially for federal employees who are considered critical workers, and “need testing in real time” if they show virus symptoms. Currently, Virginia has the capacity to administer 1,800 COVID-19 tests. U.Va. Health and VCU Health have some capacity for in-house tests, and “Sentara is close to up and running,” Northam said. Private labs — including North Carolina’s LabCorp and New Jersey’s Quest Diagnostics — still have about a five- to seven-day turnaround, Northam said. “It’s not a very effective, efficient system,” he said, calling for the federal government to lead the way in providing more tests, especially in densely populated regions like Northern Virginia.

On Saturday, President Trump plans to visit Norfolk to see off the USNS Comfort, a U.S. Navy hospital ship that is being deployed to assist doctors battling the coronavirus in New York City. The ship will provide facilities for emergency surgeries and trauma care not related to the virus, Northam said. “The deployment of the Comfort is a sacrifice for our personnel and their families,” the governor said. “We are proud Virginia can help New York in any way.”

The governor also reemphasized Friday that Virginians need to stay home to prevent further spread of the virus. Unlike many other state governors, however, Northam has not yet issued an explicit remain-at-home order, despite calls from other officials around the state.

“We’re talking semantics here. We’re talking enforcement,” he said in response to a question from a reporter about why he hasn’t issued a stay-at-home order.

Northam also has asked the federal government to provide funding through U.S. Code Title 32 to reimburse the state for costs connected to activating more Virginia National Guard members, who are assisting the state with logistics and distribution, along with other virus-related tasks.

After putting out a call for trained medical personnel to volunteer for the Virginia Medical Reserve Corps earlier this week, more than 1,500 people volunteered in the past month, including 650 volunteers in the past two days, Northam said. He also thanked companies including Micron Technologies, The Home Depot Corp. and Dominion Energy Inc. for donating protective wear for Virginia health personnel. For more information on donating protective equipment for medical workers and first responders, visit virginia.gov/covid19supplies.

More than 15 colleges and universities, including Virginia Tech and U.Va., are canceling in-person classes, likely for the rest of the semester. 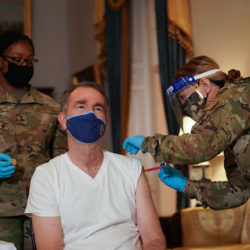