Virginia can be a key player in nascent industry

An influx of wind turbines is planned for the U.S. East Coast, and Virginia could be a key player in a supply chain producing these massive structures.

Two years later, the offshore wind industry on the East Coast is poised to take off.

Experts say that 2,000 to 3,000 wind turbines could be installed in East Coast waters during the next two decades, with the first offshore-wind projects ramping up in the Northeast. The cost to produce offshore wind power is plummeting, and many Northeastern states have set renewable energy goals that include big contributions from that source.

At the end of last year, agreements were in place to build wind farms off the East Coast generating a combined 2 gigawatts of power, with purchase agreements for another 3 gigawatts expected this year. Maryland and Massachusetts already are moving ahead with their first commercial offshore wind projects, while Rhode Island has another project underway. 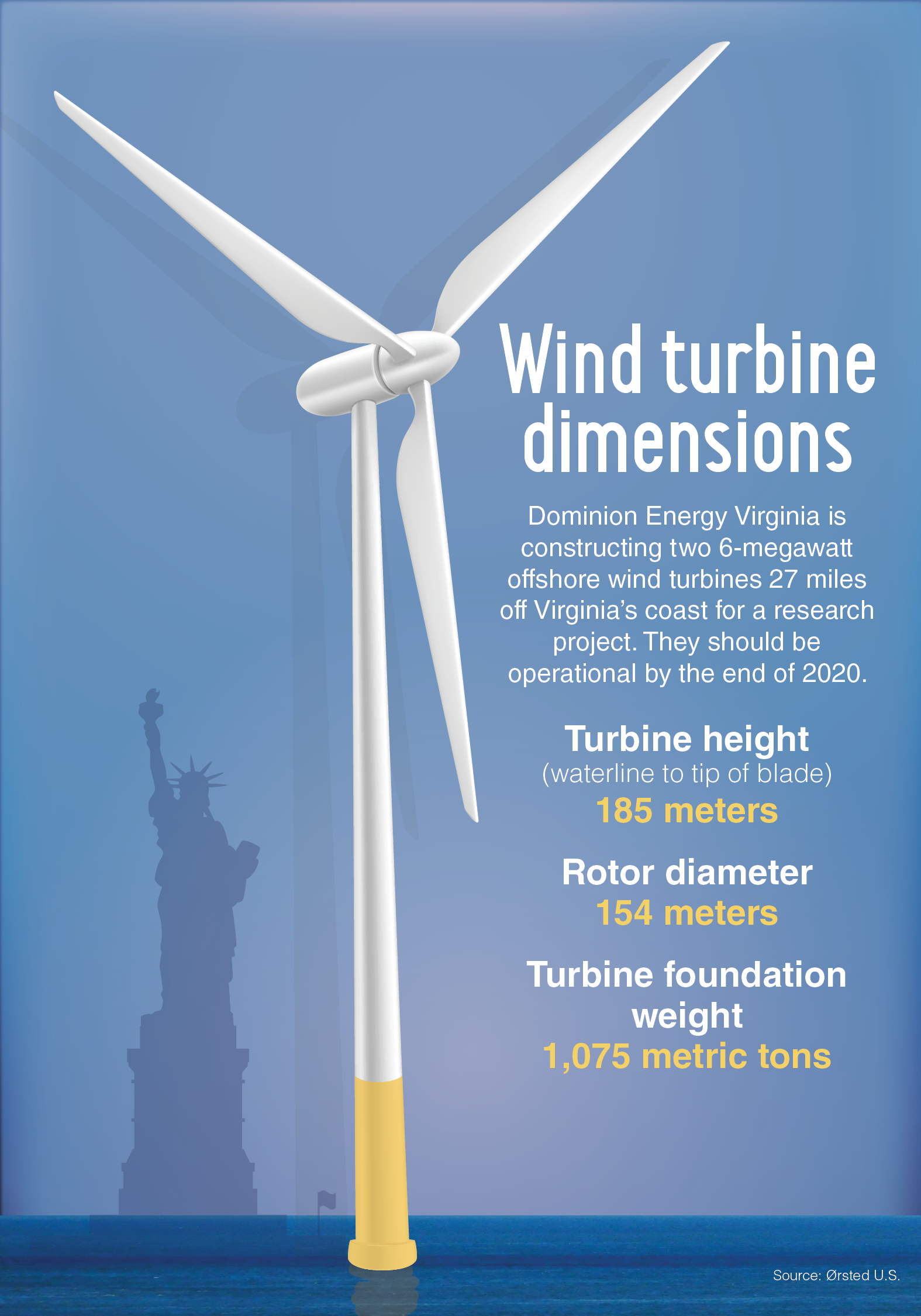 But U.S. projects currently rely on a European supply chain to produce and deliver wind farm components. The components are massive. The 5-megawatt wind turbines at the Block Island Wind Farm are 180 meters tall, or twice the height of the Statue of Liberty.

“Today, the only sources for the components used in the wind industry are manufactured in Europe,” says George Hagerman, a senior project scientist in Old Dominion University’s Center for Coastal and Physical Oceanography. “But it’s very expensive and risky to ship turbines, blades and towers from Europe. Virginia is a lot closer to New England. Even though our offshore wind industry is five to 10 years from being developed, we can provide certain components, particularly foundations, at more cost-effective prices than anyone else.”

As more commercial wind farms come online, a U.S. supply chain is expected to emerge. Virginia could create thousands of jobs building components such as foundations and offshore substations, according to a 2018 report produced by the consulting firm BVG Associates. The report cites Virginia’s pro-business climate, deepwater ports free from overhead obstructions, maritime workforce and dock capacity as its advantages in becoming a major industry player.

Like Hagerman, John Warren, director of the Virginia Department of Mines, Minerals and Energy (DMEE), characterizes the commonwealth as a prime location for the nascent industry. “Virginia has a robust infrastructure with its port and deep harbor,” he says. “The ports up north are more constrained.”

Virginia is exploring ways to collaborate with other states to create a multistate supply chain, Warren adds. “We have the perception that the industry wants a wide net with a lot of flexibility. Instead of saying, ‘Come to Virginia, we’ll give you everything you need,’ we say, ‘Come to Virginia, and we’ll let you spread out requirements to as many states as you need.’”

Hagerman agrees that collaboration is the way to go, especially for mid-Atlantic states awaiting their turn to install offshore wind projects. “Every state has the capacity to create anywhere from 1,000 to several thousand jobs supplying components that are unique to that state,” he says.

For example, steel produced in North Carolina and Maryland plants would become wind-turbine foundations in Virginia. “So, North Carolina, Maryland and Virginia have the potential to collaborate,” Hagerman says. “There’s such big industry in every state. Virginia doesn’t need to make everything. We can make what we’re best at and do it collaboratively.”

But those partnerships need to be formed soon. “By the end of summer is the optimal time for a Virginia-based joint venture to start the process if we really want to get in on the ground floor of the market,” Hagerman adds. “It could be a great win-win outcome, but we’ve got to get together and take the risk.”

A Virginia wind farm?
Large-scale offshore wind farms are expected first to develop in the Northeast. “The New England states are where the first offshore wind projects in the U.S. are likely to be the most economical,” says Hagerman. “Wind speeds on average are higher off Massachusetts, Rhode Island and New York than they are off Virginia, and New England customers pay twice as much for electricity as those in Virginia, so offshore wind has a better chance of being economically competitive in that market.”

As turbines are built in New England waters during the next five or six years, offshore wind projects will begin to move south, Hagerman believes. “That’s when Virginia is likely to be economical,” he says. “By then, the industry will be more mature, and everybody will be more efficient.”

But it won’t be long before Virginia sees two massive turbines in its waters. Dominion Energy Virginia is set to become the first electric utility company to own an offshore wind project in the U.S. The facility will be used as a research project.

Dominion has contracted with Danish firm Orsted Energy, one of the world’s largest wind-energy developers, to construct two 6-megawatt research wind turbines 27 miles off Virginia Beach in 2,135 acres of federally owned waters leased to the DMME. Dominion will start onshore construction this spring, with Orsted expected to install the turbines in summer 2020. Projected to be operational by the end of next year, the turbines would produce 12 megawatts, enough to serve 3,000 Dominion customers.

Dominion’s endeavor will be the second offshore wind project in the U.S. and the first to be built in waters leased from the Bureau of Ocean Energy Management. The company plans to use information gleaned from the permitting, construction and operation of the project to develop additional turbines in an adjacent, 112,000-acre commercial wind-energy site. Those turbines could be deployed as early as 2024, says Mark Mitchell, Dominion’s vice president for generation construction.

The utility estimates that Virginia’s offshore wind can support up to 2,000 megawatts, providing enough energy to serve 500,000 homes. “Offshore wind produces good opportunities, and we’re very optimistic that the offshore wind industry will be a good resource to be developed,” Mitchell adds. “It’s a large viable generated resource that is sitting right off our coast.”

You’ve got to be green