Remembered for bipartisanship and military support during 30-year Senate career

Former U.S. Sen. John W. Warner III, who died Tuesday at the age of 94 in Alexandria, was remembered Wednesday as a principled, patriotic and bipartisan politician who was one of Virginia’s longest-serving senators and the former chairman of the Senate Armed Services Committee.

The last Republican to hold one of Virginia’s Senate seats, Warner was a World War II and Korean War veteran born in Washington, D.C., in 1927. He received his degrees from Washington & Lee University and the University of Virginia School of Law, and before entering elected politics was the Secretary of the Navy from 1972 to 1974 under President Richard Nixon.

Gov. Ralph Northam called Warner “a giant” in a statement released upon the announcement of the 30-year senator’s death.

“John Warner truly was the best of what public service and elected leadership should be, and his loss leaves a deep void,” Northam said. “Pam and I join the commonwealth in mourning his death. Our prayers for comfort go out to his wife, Jeanne; his three children, grandchildren, scores of friends, and all those who loved him.”

U.S. Sen. Mark Warner, no relation, who succeeded John Warner in the Senate in 2009, called the former senator “a consummate statesman and a public servant who always put Virginia before politics.”

In 1978, John Warner ran for the Republican Party nomination for U.S. Senate and came in second but was later chosen as the nominee after the victor, Richard D. Obenshain, died in a plane crash two months after the primary. Warner was prominently known as Elizabeth Taylor’s sixth husband, which lent his campaign more glamour than Virginians were accustomed to in the political world. In 1979, after defeating Democrat Andrew P. Millerz in the general election, Warner took his seat in the Senate, which he held for five terms, Virginia’s second-longest tenure. (The late U.S. Sen. Harry F. Byrd holds the record, with 32 years in office.)

On the Senate floor Wednesday, Sen. Mark Warner and Sen. Tim Kaine paid tribute to a man they both said they relied on for advice during their own political careers as Virginia governors and in the Senate, despite being from the other side of the aisle.

“Anything that I tried to do as governor that was hard, John Warner was right by my side,” Warner said. Kaine noted that during President George W. Bush’s administration, the extension of the Metro Silver Line was in jeopardy from being cut from the federal budget and “John Warner helped us get in and save that project.”

One of Warner’s proudest moments, Mark Warner noted, was when a nuclear-powered Virginia-class U.S. Navy submarine was named for him in 2014. The USS John Warner was built by Newport News Shipbuilding and was the first of its class named for a person. At the christening ceremony, John Warner said, “We are here tonight to not just honor Jeanne and John Warner. We’re honoring America — America’s strength, America’s commitment toward peace and stability in the world. That’s what this magnificent vessel hopefully will do for its entire 35 years.”

Warner is survived by his wife, three children and two grandsons. 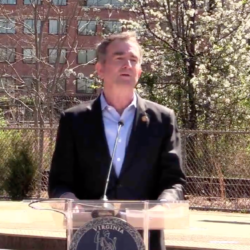