Bradley succeeds Tysons Partnership President and CEO Sol Glasner, who is stepping down Dec. 31. Glasner announced his retirement in August after serving in the position for about four years and serving as the chair of the board from 2012 to 2014, not long after the partnership was founded. A spokesperson for the agency would not provide details about whether the partnership’s board is still conducting a search for a permanent executive director.

“Rich has been working with the partnership as an adviser over the past year as we have continued in our pursuit working with the county to transition the organization,” said Tysons Partnership Board Chair Josh White in a statement. “Rich is a seasoned professional with decades of experience as an advocate and champion for livable urban management districts in this region and throughout the world. He has spearheaded numerous strategic planning efforts and headed up transportation management programs, so really is a perfect fit for the partnership’s current needs.”

The Urban Partnership is a consulting firm offering a range of innovative urban planning, development and management services. Bradley’s partner there is his wife, Ellen McCarthy.

Bradley was founding executive director of the DowntownDC BID (business improvement district), where he worked for 17 years. Started in 1997, the nonprofit provides capital improvements, resources and research to the BID, which encompasses a 138-block area of 520 D.C. properties and is one of the region’s largest such districts.

Tysons Partnership also has promoted Drew Sunderland to deputy director, and he will be responsible for daily operations of the partnership. Sunderland has been with the organization since 2014, leading key initiatives in branding, marketing and business development. He also led efforts to develop the partnership’s Tysons Economic Study and Market Report.

The partnership’s mission is to transform Fairfax County’s 4-square-mile Tysons area into an urban, downtown-like walkable destination district by 2050. An economic report released by the partnership earlier this year was optimistic, noting that the housing market is booming there, with forecasted growth. The report noted that Tysons is “well on its way to achieving the 40-year vision of the Comprehensive Plan” that was adopted for the region by Fairfax County government in June 2010.

“The county is working closely with Tysons Partnership to determine best practices and the best approach for a transition,” said Fairfax County Supervisor Dalia Palchik in a statement. “Rich is helping to frame the picture and providing guidance through his connections to the International Downtown Association. Both the county and the partnership benefit from his experience as we work together to define what a future anchor organization for Tysons might look like.” 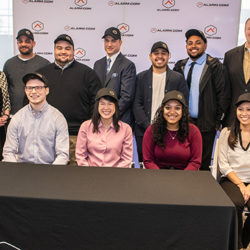 Labor shortages remain problem, though, according to workforce index