Home News Turning on a dime

Turning on a dime

Though many American consumers may not think about it much, trucks move just about everything they buy, use, eat, drink and wear.

The U.S. trucking industry hauled 72.5% of all freight transported nationwide in 2019, according to the Arlington-based American Trucking Associations.

The shortage could more than double by 2030, the ATA projects. Part of the problem is due to the high average age of truckers and an increasing number of retirements. Other factors include a shortage of women truck drivers, just 7% of all 3.36 million U.S. commercial truck drivers; the inability of some candidates to pass a drug test, complicated by the growing legalization of marijuana; and a federal law prohibiting truckers younger than 21 years old from crossing state lines.

“This is our No. 1 issue,” says Dale Bennett, president and CEO of the Richmond-based Virginia Trucking Association, who puts Virginia’s trucker shortage somewhere between 1,800 and 2,000 drivers. “We had a shortage of drivers before the pandemic hit,” he notes, adding that once COVID-19 arrived, “it just exacerbated it.”

On the national level, the Infrastructure Investment and Jobs Act of 2021 passed by Congress includes a nationwide pilot program — the Safe Driver Apprenticeship Program — to train truckers under the age of 21 to cross state lines, which could provide some relief, Bennett says.

But to help turn the situation around on the state level, the Virginia Trucking Association partnered in January with the Virginia Ready Initiative (VA Ready), a nonprofit that is marshaling the training power of the state’s 23 community colleges to “reskill” Virginians for in-demand jobs through a series of credentialing programs.

“There’s been a lot of demand and interest from the community as the supply chain shortages and the logistics issues have really struck America,” says Taylor Beck, partnerships manager with VA Ready, which was started in summer 2020 by future Gov. Glenn Youngkin and his wife, Suzanne, now the first lady of Virginia. That demand and interest is “what sparked VA Ready to reach out to the Virginia Trucking Association,” Beck adds.

Since January, when the trucking association began partnering with VA Ready on the initiative, 188 candidates have enrolled in the commercial driver’s license program.

VA Ready first launched its own version of the CDL reskilling program in August 2020. Since then, a total of 963 people have enrolled in CDL classes with VA Ready’s help, with 393 earning their certification and CDL. Of those who successfully completed the course, 197, or 50.1%, are now employed.

Students who complete the course successfully are eligible to receive a $1,000 award from VA Ready. Depending on which community college one attends, it can take 6 to 12 weeks to complete a certificate course and earn a CDL.

Bennett says those enrolling in the partnership’s program with VA Ready are in their mid-30s on average, suggesting to him that they’re people who initially couldn’t get jobs in interstate trucking but are now giving it another shot.

The trucking association has eight of its member companies participating, including Chesapeake-based Service Transfer Inc., one of the biggest trucking firms in Hampton Roads.

“There’s a great need for more port truckers; there’s a severe shortage,” says Ray Jalkio, Service Transfer’s vice president of sales and also president of the Tidewater Motor Truck Association, which has 60 member companies, most of which haul containers to and from the Port of Virginia.

“We want to add drivers to our fleet,” Jalkio says. “Our hope is that through our sponsorship of the program, we’ll benefit.” 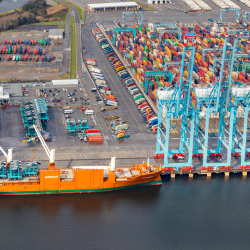 Details about the economic engine 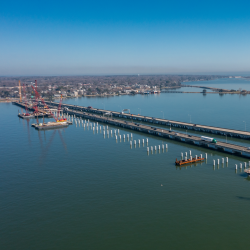 An update on statewide road projects