To get a turkey on your Thanksgiving table this year, you may have to plan ahead. And even so, ham, pork tenderloin, chicken or even tofurkey might have to fill in as substitutes.

Ukrop’s Homestyle Foods, the Richmond-based prepared food business spun off from the former regional grocery store chain, informed its customers Tuesday that it won’t be able to fill pre-cooked turkey orders for Thanksgiving this year.

The company put in an order for 2,000 turkeys from Butterball and received a notice that the order was canceled due to an operations situation, Robert S. “Bobby” Ukrop, chairman and CEO of Ukrop’s Homestyle Foods LLC, told Virginia Business.

Supply chain issues that started during the COVID-19 pandemic have been exacerbated by several factors, including a national labor shortage and shipping slowdowns, and are likely to continue impacting businesses throughout the holidays, economists and logistics experts say. Last month, the Consumer Price Index rose 5.4 percent compared with September 2020, driven in part by shortages in consumer goods.

The supply chain issue spurred action from President Joe Biden, who announced Wednesday that the Port of Los Angeles would begin operating around the clock in an effort to address a backlog caused by a variety of factors, including trucking labor shortages. Biden also said that major shipping companies and retailers, including UPS, FedEx and Walmart, would be increasing work hours to address problems in ports, factories and shipping lanes that have helped produce shortages, long delivery times and rapid price increases for food, televisions, automobiles and much more, The New York Times reported.

In an Oct. 12 Facebook post and marketing email, Ukrop’s Homestyle Foods wrote that its supplier cited “the same concerns that just about everyone is experiencing: ingredient, packaging, transportation, and labor shortages.” Instead, the business is urging its customers to order hams and side dishes.

Ukrop says the company has ordered more ham this year: “The pandemic has caused us to expect the unexpected, and surprise is a part of the program.”

“It was like a Chick-fil-A drive-thru on steroids,” Ukrop recalled.

Last year, with a full, expansive catering menu, customers ordered more than 10,000 items, Ukrop said, but this year, the company wanted to only put things on the menu that they were confident they could get.

Due to issues with sourcing ingredients and packaging, Ukrop’s made a decision to reduce its offerings this holiday season, scaling its usual holiday catering menu back to 34 items. For example, London broil, a dish usually offered through the company’s catering service, won’t be available this year. Chicken salad and tuna salad are likewise off the list. Customer favorites such as deviled eggs, ham biscuits and country ham cheese balls still remain, though.

“It’s very frustrating for us because we hate to disappoint people,” Ukrop said. “We place a very high value on not over-promising.  We want to deliver on what we say. That’s the way we’ve always done business.”

Despite the supply chain difficulties Ukrop’s encountered, Hobey Bauhan, president of the Virginia Poultry Federation, says consumers shouldn’t panic about whether they’ll be able to get a turkey this year. “It’s not a widespread shortage,” Bauhan said Tuesday. “Supplies are tight, but if people plan ahead, they should be able to get the turkey products of their choice this Thanksgiving.”

Nevertheless, with supply chain problems looming, markets around the commonwealth are preparing for the possibility of shortages of holiday basics and are building up inventory in advance of Thanksgiving and Christmas. A smaller grocer and a butcher contacted for this story declined to comment on the record, worried they could spook customers from buying at their stores.

Ukrop said his company expects to sell more hams this year since it can’t offer pre-cooked turkeys. Last year, the company sold about 400 hams a la carte. Getting hams seems to be less of a challenge, he said, and the company’s pared-down catering menu still represents 80% of what people want on their tables this holiday season, Ukrop said.

Bauhan said that “[poultry] operations in Virginia that are supplying turkeys are cranking. They’re producing and distributing fresh turkeys for Thanksgiving. I’m not getting any indication from them that there is a significant shortage of turkeys.”

But that doesn’t mean there aren’t issues impacting the distribution of turkeys to stores, Bauhan said.  “There’s upward pressure on a lot of inputs across our sector, from feed, which is 70% of the cost of producing poultry, [to] labor costs, transportation and packaging [costs].” Feed costs are going up, and just like many other industries, poultry plants also are experiencing staffing shortages.

Packaging is one of the issues Ukrop’s is encountering, too. A shortage of lids and eight-ounce containers has impacted the company’s menu.

Erika Marsillac, an associate professor of maritime and supply chain management at Old Dominion University, said several factors are impacting the food supply chain. “A retail order can be canceled because suppliers anticipate they will be unable to deliver the order at the right time or they find another customer that is willing to pay more,” Marsillac said. “Across all food supply chains, we are seeing food inflation and canceled shipments from supply chain disruptions.”

In the poultry industry, the “workforce was tight before the pandemic hit and now it’s pretty significant,” Bauhan said.

Virginia’s poultry industry is largely centered in the Shenandoah Valley, with other major operations in the Richmond region and on the Eastern Shore. All are facing labor challenges, but it’s hard to say what a normal year would look like, Bauhan said.

“Last year was unique,” Marsillac noted. “With many families socially distancing over 2020, smaller birds were preferred for holiday meals. Most retailers are now estimating that family holiday gatherings will be bigger this year, but those estimates may have arrived too late to change the decisions that were already happening in spring.”

When looking at commercial customers, smaller businesses such as Ukrop’s may lose out to larger ones, like the Walmarts of the world.

“In general, smaller supply chain partners have less ‘power’ or influence in the supply chain,” Marsillac said. “Assuming there are a limited number of turkeys available, suppliers may be forced to make a tradeoff decision to cancel some orders for smaller retail chains in order to be able to fulfill the orders for larger retail chains.”

Much planning is done well before Thanksgiving. One market said they place their order for the next year’s Thanksgiving a year out.

“The poultry industry has a significant lead time, forecasting in as early as late spring what size turkeys will be needed for the holidays,” Marsillac said. “The farmers need to make decisions about volume, sizing and breeding or acquiring the chicks. Once acquired or hatched, the turkeys take more than three months to grow to the right size for processing, and then you must add the supply chain time from processing to getting the turkeys to the grocery store shelves.”

Marsillac suggested that consumers seek locally-sourced options for turkeys and other holiday meats and plan ahead.

“Without trying to feed into any panic buying, I’d suggest consumers buy their preferred holiday protein when they see it available and store it until the holidays or speak with their local butcher or farmer now about the possibility of getting locally sourced holiday protein closer to then.”

Ukrop said companies all over the world are having to make hard decisions every day. And the situation is fluid.

“The various decisions that companies are making all over the world … everybody’s trying to do the right thing. There are just so many unanswered questions and so many decision points where things can get sideways in the supply chain, and I think everybody is trying hard, as best they can,” he said. “It’s just a crazy situation. …. The problem is, the rubber band gets stretched so thin, to an extreme, so the fact that our supply chain is probably very, very efficient in a normal situation, it can’t withstand all the disruptions that we have. It’s a good learning [experience], I guess, we have, for having a certain amount of safety stock and not having a system so tightly wound that when things go sideways, they really get messed up.” 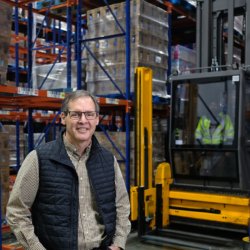