The 64,000-square-foot office facility will be located on 8 acres along Crossover Boulevard near Interstate 81. The company’s corporate offices are currently located on Exeter Drive in Frederick County.

The decision was “years in the making and is a direct result of our growth over the years, coupled with expected growth for years to come,” says Leslie Adkins, the company’s vice president of marketing.

“Ultimately, the selected site offered all this plus visibility alongside the heavily traveled Interstate 81,” Adkins says.

Trex also will receive a tax break from the city, according to Shawn Hershberger, Winchester’s development services director. Under the agreement, Trex will pay all assessed property taxes on the new building but, for the first seven years, the Winchester Economic Development Authority will refund any portion of Trex’s tax payment that exceeds the amount currently being generated by the site.

The new headquarters, which is expected to open in mid-2023, will house approximately 200 employees and will feature eco-friendly elements such as electric vehicle charging stations and rooftop solar panels, reflecting Trex’s commitment to sustainability. The company expects to hire about 150 additional employees across all of its divisions, including at its newly expanded Shawnee Drive decking production facility in Frederick County.

Hershberger says Trex’s new corporate offices will help enhance Winchester’s Pleasant Valley Road corridor, which the city has prioritized for growth. “It has already helped spur additional interest in the acreage around it,” he says.

In 2020, Fortune magazine named Trex one of the nation’s 100 fastest-growing companies. The manufacturer is coming off a 12-month period that ended in September 2021 in which it reached $1 billion in revenue.

“While many companies shifted to remote work and halted building expansions, Trex is in somewhat rarefied air in that demand for our products has grown consistently over the last decade and surged during COVID as more and more homeowners focused on improving their homes and outdoor living spaces,” Adkins says. 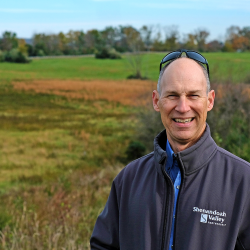