Will it become America’s next great city?

In 1950, Tysons Corner was little more than a mom-and-pop general store at the intersection of state Routes 7 and 123 surrounded by farms with peach orchards and wheat fields.

By 2050, a rechristened Tysons is expected to be a bustling, cosmopolitan metropolis of more than 100,000 residents living, working and playing beneath an urban skyline of spires and towers.

“Our mantra is … ‘Building America’s Next Great City,’ and we really do believe that. It is a city on the rise. That’s what we’re aiming for, and it has all the ingredients for becoming exactly that,” says Sol Glasner, president and CEO of Tysons Partnership, a nonprofit association of stakeholders promoting growth in Tysons.

Fairfax County created its Tysons Comprehensive Plan in 2010, laying out a 50-year vision for transforming the community into a full-fledged city, replete with skyscrapers and high-density residential areas. Ever since then, Tysons has been on a fast track for growth.

Construction cranes dot the horizon, erecting mega-projects such as the new 5.2-million-square-foot Capital One complex. Its sleek, glass-fronted centerpiece is a 470-foot-high, 31-story corporate headquarters tower that will be the next-tallest building in the D.C. metro region, second only to the Washington Monument.

About  5,000 employees are expected to work at the new campus, and they will have access to modern amenities. 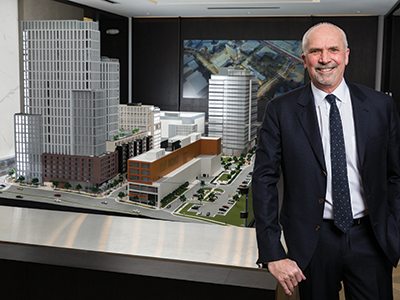 Another highly anticipated project under development is The Boro, a $485 million, 4.2-million-square-foot, mixed-use project. It could be a poster child for the modern corporate workplace with a 32-story luxury apartment building, a 15-screen movie theater, a half-acre skypark and the second-largest Whole Foods grocery store in the nation. The developers behind The Boro are The Meridian Group, a Bethesda, Md.-based real estate investment and development company, in partnership with Kettler, a McLean-based development and property management firm.

Other major projects proposed or underway in Tysons include:

As part of the Tysons Comprehensive Plan, the county government has streamlined zoning in the roughly 2,000-acre area that makes up Tysons.

“There’s sort of an unlimited amount of office, residential and retail that can be built here. … So there’s really no constraint other than economics to keep people from developing,” says Kettler CEO and President Robert C. Kettler. “It’s happening very, very rapidly. I mean, there’s just stuff going everywhere. And so it’s starting to look different and evolve.”

Developers started building in Tysons Corner in the 1960s, drawn by the newly built Capital Beltway that ran right through it, as well as the convergence of state Routes 7 and 123 and the community’s prime location near the region’s two major airports, now called Washington Dulles International Airport and Ronald Reagan Washington National Airport.

By the early 2000s Tysons was known for its corporate office parks and two sprawling, upscale shopping malls, Tysons Corner Center and Tysons Galleria. It was considered an urban “edge city,” growing in the shadow of the larger Washington, D.C., metropolitan area.

With the 2014 construction of the Silver Line extension of the D.C. Metrorail system, development revved into high gear around four new Tysons Metro stations.

Just as affluent Fairfax County provides about 25 percent of the state government’s income tax revenue, so, too, is Tysons an economic engine for Fairfax, generating about a quarter of the county’s tax revenues, says Gerald L. Gordon, the president and CEO of the Fairfax County Economic Development Authority.

It essentially already has been a city for some time now, Gordon says. “We have … 120,000 jobs, 28 million square feet of office space. … We have more space in Tysons Corner than most U.S. cities, except for the top 20 or so.”

Tysons currently is the nation’s 12th largest central business district. The only difference between Tysons and other cities, says Gordon, is that Tysons currently has only about 20,000 to 25,000 full-time residents. Yet Tysons is expected to swell to a city of 100,000 residents and 200,000 workers by 2050.

Attracting those residents and creating distinct neighborhoods where they can live, work and play were key topics at a recent Bisnow conference that examined the challenges of creating a city. Those challenges include affordable housing and dependable mass transit.

During the conference, Clemente Development Co. CEO Dan Clemente reminded attendees about the need for affordable workforce-priced housing, so that hourly and middle-class workers, such as waiters, bartenders and secretaries, can afford to live in Tysons instead of having to commute in Northern Virginia traffic. His project, The View, includes a 1,400-unit multifamily apartment building near the Spring Hill Metro Station, where all units would be affordably priced.

“To succeed, [Tysons] has to become livable. It has to be a place you and I want to spend time in,” said Stephen Fuller, director of George Mason University’s Stephen S. Fuller Institute for Research on the Washington Region’s Economic Future. “When we have as many people living in Tysons as working here, then you will know we have succeeded.”

“Great cities have destination art; they have parks you want to go to; they have iconic skylines,” Pankiewicz said.  Tysons will have grown into the county’s vision for it, she said, “when people want to come here and spend three days in Tysons because they’re going to see art, restaurants and shows and have a multiday experience.”

Great cities also have mass transit. In recent years, the D.C. area metro system has been in dire need of repairs and maintenance. Service has been unreliable, and safety problems have even led to deaths.  To address these issues, Virginia, Maryland and Washington, D.C., recently agreed to a cost-sharing plan to provide funds for the Metro. The 2018 Virginia General Assembly approved $154 million per year in capital funding, while Maryland has committed $167 million annually and the District has pledged $178 million. The action represents the first time the Metro has had a dedicated funding source since it opened in 1976.

The financial support comes as Amazon considers NoVa, D.C. and Montgomery County, Md., as potential sites for its highly sought after second corporate headquarters. One of the caveats Amazon spelled out during its site selection process was access to public transit.

Besides transit, creating a Tysons with quality dining, entertainment and recreation is “mission critical,” said Asheel Shah, president and chief investment officer of Kettler’s multifamily division. “A Tysons where everybody gets into their car and leaves [at the end of the workday] is not the Tysons we’re all planning for the future.”