When he learned of the project, Dwight Schar, the founder of Reston-based homebuilding company NVR Inc., was determined to help in any way he could.

First, Schar drew on his real estate experience to help Inova acquire the property needed for the new center. He served as a negotiator in the 2-year, $180 million acquisition of the former ExxonMobil corporate campus and its 1.2 million-square-foot former headquarters. Inova will open that building in 2018, after it is renovated, equipped and staffed at a cost of approximately $270 million. The facility will house all of Inova’s existing clinical cancer specialists and treatment facilities — which now are scattered around the Fairfax area — along with new cancer research programs.

Once the campus deal was completed last year, Schar and his wife, Martha, decided to give $50 million to the effort to create a world-class cancer treatment and research center for patients and clinicians. The gift is, by far, the largest single donation Inova has ever received (and the largest for any health-care organization in Virginia), and the still-in-development center has been named the Inova Schar Cancer Institute.

“That Dwight would come to me and be that generous and reach for such an outsized goal does not surprise me at all,” says Inova CEO J. Knox Singleton, who has been a friend of the Schars for more than 20 years. “He is someone who is extremely humble and doesn’t like the limelight, but he’s also an achiever who loves taking on a challenge, whether it’s a societal problem or a building or a business, and making something where there wasn’t something before.”

Seeking $200 million
The Schars’ donation jumpstarted Inova’s campaign to raise the $200 million it needs to recruit top physicians, scientists and clinical investigators in the emerging field of personalized cancer genomics.

The Schars’ gift, however, isn’t just about providing the money needed to begin hiring. Singleton says the size of the gift has been critical to establishing confidence and credibility in the project.

“Even getting the first one or two top people to think about moving here is largely dependent upon them believing and trusting that we can raise the total amount of money that we need and that the project is actually going to come to fruition,” Singleton says. “This gift set the bar high enough to give that confidence to the kind of top people that other clinicians and researchers want to work with. And their presence then inspires other philanthropists to give and support us in the next round of giving.”

Inova already had recruited several pre-eminent names in the personalized medicine discipline, including Dr. John Niederhuber, a former director of the National Cancer Institute, and Dr. Donald L. “Skip” Trump, the former CEO and president of the Roswell Park Cancer Institute, but since the Schars’ gift was announced, a number of prominent clinicians have come onboard. They include Dr. Joan H. Schiller, who is internationally recognized for her work in lung cancer research; Thomas P. Conrads, who previously served as the chief scientific officer of the Department of Defense Gynecologic Cancer Center of Excellence and as head of the Cancer Biomarkers Facility in the University of Pittsburgh Cancer Institute; and Dr. Stephanie Akbari, a pioneer in breast cancer surgery.

What’s more, Inova has also received a gift of $10 million from developer Milt Peterson and several smaller but significant donations. When added to the $50 million the Schars gave, the campaign has already raised nearly $75 million of its $200 million goal. Singleton says the Inova Foundation will continue to quietly seek out donations (including those as high as $25 million) during the next two years.

“For a project like this, you need to set in motion this huge virtuous cycle, kind of a flywheel, and the Schar gift has clearly started that flywheel in a big way,” Singleton says.

Touched by cancer
For the Schars, the support and hands-on effort they’ve provided to cancer institute is personal.

A number of the Schars’ close relatives have battled cancer, including Dwight’s mother, who died in 1968 with a type of cancer that today would be curable.

“Everyone is touched by cancer in some way,” Dwight Schar says. “How many of us have known someone who, had they gotten better treatment earlier, could have been a survivor rather than a victim of cancer?”

The answer to that question is at the heart of Inova’s vision for cancer research. The new center will focus on discovering and applying personalized cancer treatments.  It will individualize care, focusing on the specific genetic makeup of each patient and type of cancer being treated.

“The historic approach with cancer was to give everyone the best drugs we had and hope for the best, but the reality is that one treatment that works on one person doesn’t necessarily work on someone else,” says Singleton. “So almost everything that we do here will be identifying the genetic subtleties of different types of cancers and finding drugs that more effectively treat those cancers; discovering new genetic tests that help us determine which drugs work best on which patients; or figuring out which cancers are going to metastasize rapidly and which aren’t and being able to tell the difference so we can tailor treatment to the exact type of tumor someone has.”

The Schar, as the institute is informally called, also will be distinctive because of its integrated, synergistic approach to personalized cancer treatment. Not only will the center have clinical care, applied research programs and an education component for physicians and other clinicians, but in time, the campus will be further developed to house biotech firms that commercialize the research developed at Inova.

“This will not only be a clinical engine, but it will also be an economic engine that’s going to grow companies, employment, the tax base and, hopefully, the quality of life in Virginia,” says Singleton. A study commissioned by The Schars found that the new center will have an economic impact of $2 billion in construction, operations, commercialization and related lodging, restaurant and retail spending.

The Inova project perfectly fits the Schars’ philanthropic philosophy and strategy: They always have tried to give to causes and projects that can have a transformational effect on basic human needs, such as education and health care. The couple, for example, provided the majority of funding for a new nursing school and athletic complex at Dwight’s alma mater, Ashland University in Ohio. In May, Dwight gave $10 million to the George Mason University school of policy, government and international affairs, which will be renamed the Schar School of Policy and Government. Other recipients of major donations from the Schars have included United Way,  Elon University, Child Helps and Youth for Tomorrow.

The new cancer institute “is clearly a case where the leverage of the gift is going to be many-fold the amount of the actual contribution,” Schar explains. “This new center will save lives in a significant way, not just in Virginia and the region, but across the country.”

Schar, who is a part-owner of the Washington Redskins, also characterizes his efforts with Inova as a small payback to the region that has played such a huge role in his life.
“Local people in this area will now have access to world-class but timely and convenient cancer care without having to travel to Minnesota or Manhattan or Boston or wherever to get the latest cutting-edge treatment,” he says. “And it will bring a lot of jobs and economic opportunity to Northern Virginia. It’s just an amazing opportunity to be part of something that will make a difference in so many lives.” 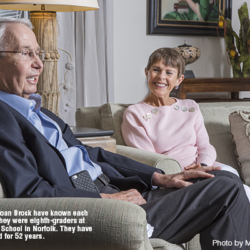