Twenty years ago, there were no female CEOs at Fortune 500 companies. Today, there are 22, 4.4 percent of the total. About the same percentage lead S&P 500 companies. So, at best, the journey of women to the C-Suite has edged forward at a glacial pace.

A  Pew Research Center study published a year ago found that Americans believe women are not moving into senior executive positions at a faster rate because they are being held to a higher standard. Women have to do more than their male counterparts to prove their leadership capabilities, the study suggests.

Melissa Thomas-Hunt, senior associate dean and global chief diversity officer at the University of Virginia’s Darden School of Business, says more women are becoming interested in honing their leadership skills and so are the companies that employ them.

“The big trend I’ve noticed at Darden and around the globe is the demand for women’s leadership programs. There were few of them 10 years ago … [But] today, companies need all the talent they can find. They are looking for the absolute best talent,” she says.

Darden offers the Women’s Leadership Program, a short course, through the school’s executive education program. The course is designed for female executives and women with management responsibilities.

Thomas-Hunt says that efforts to recruit and retain women in top positions, especially in technology companies, have reached a critical stage. Tech companies are concerned about the relatively low number of women entering, or staying, in the field, she says. 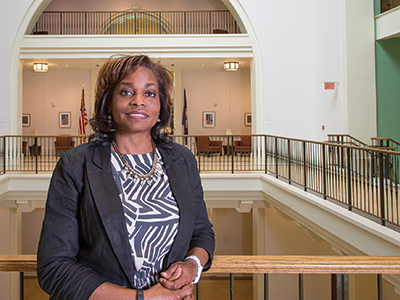 Rosanna Koppelmann, executive director of the Center for Corporate Education at the College of William & Mary’s Mason School of Business, says that — for the first time in her decadelong tenure at the school — a company recently asked her to put together a leadership program for women employees.

“The CEO/president saw this as an important strategic, capital-development piece. They’re really trying to develop [talent among] women in their workforce,” Koppelmann says.

In Mason’s executive education programs, she adds, instructors don’t distinguish between the leadership roles  of men and women. Instead, the process focuses on identifying and cultivating leadership characteristics and helping companies develop good leaders.

Koppelmann encourages women to look at their professional goals in a much more intentional manner rather than seeing a move into upper management as a matter of happenstance.

She laughs in recalling high-level discussions about plans for Miller Hall, the Mason School’s home, which was completed in 2009. The design called for a baby room for nursing mothers.

Koppelmann says some of the men involved in the project drew a blank when they saw “baby room.” They wanted to know, “What do we do with that?”
She uses the story to illustrate the importance of women’s input in leadership decisions. “You’re not going to have the right conversation if the diversity isn’t there,” she says. 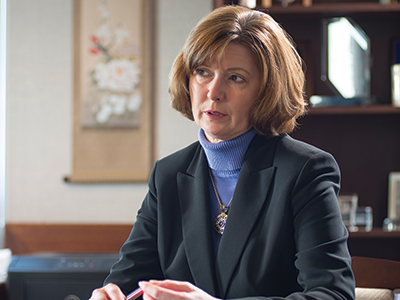 Mary Gowan knows what it’s like to be one of the few women leading an organization in certain fields. When she was named the head of James Madison University’s College of Business in 2013, she was only the third female dean among the nation’s 15 top public undergraduate business schools.

Ironically, that percentage fails to reflect the rising number of women in business. In 2013, women held 52 percent of managerial and professional occupations in the U.S., a jump from about 31 percent in 1968, according to Pew research.

Gowan has extensive consulting and executive education experience with private and public organizations in the areas of leadership, human resources management and organizational behavior. She says male executives are sometimes not sure how to deal with the increasing number of women in management.

As a consultant, she once coached a male executive on how to address female leaders in his company. “He said if [the executive] was a male, he would know how to respond,” Gowan says. But in dealing with women, he was concerned about making missteps.

The JMU dean says because, achieving leadership positions still represents a challenge for women, the College of Business is doing what it can to help. Three years ago, it started a conference focused on women in leadership.

“We bring alums back to participate, to empower women to think about their future. And encourage them to lean in,” accepting leadership opportunities when they present themselves, even if the challenges seem huge, Gowan says.

In a changing workplace where some women are breaking through to high executive positions, Gowan notes that traditional relationships between spouses also are changing. “I have seen a lot of successful women whose [husbands have paused] their careers to help their wives,” Gowan says. 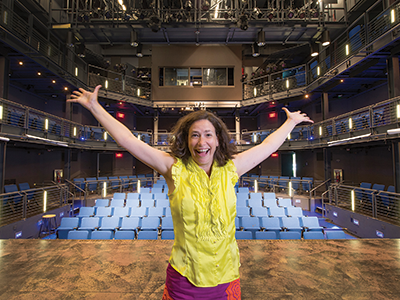 She says many women attend her programs because they want to empower themselves in the workplace. “Women are more susceptible to thinking less of themselves,” Alonzo says, and a change of attitude can lead to a better job.

She teaches women executives and managers — and those aspiring to such positions — techniques that can help them navigate a communications code that they may not even be aware of.

For example, Alonzo says, women often sit on the perimeter of a group, not positioning themselves among influencers who can help them. And women have a tendency not to make as much eye contact as they need to. “It is a difficult thing for women to unpack how they should present themselves,” she adds.

While women are making leadership gains in the business world, the Darden School’s Thomas-Hunt says female managers and executives sometimes fall short advocating their own career advancement. “Women on average feel less comfortable entering into a negotiation when they are negotiating for themselves,” she says.
New executive education leadership programs now in the works at many universities may help bolster their confidence.