In nearly 40 years of farming, Mecklenburg County soybean farmer John Wesley Boyd Jr. has seen commodity prices go up and down, but the recent impact on his business from the ongoing U.S. trade conflict with China has been “devastating,” he says.

“We’re in trouble. … The prices have dropped dramatically and we don’t see any end in sight,” says Boyd, who is also the founder and president of the nonprofit National Black Farmers Association. “It’s planting season, and President Trump announced  … some additional tariffs, and we haven’t gotten over the effects of the first ones, you know? … I think a lot of farmers are going to be on the auction block.”

Soybean prices have been sharply declining since early 2018 when the Trump administration initiated a series of tariffs targeting China, Mexico, Canada and the European Union. China and the other nations responded in kind with a host of retaliatory tariffs. President Trump relaxed tariffs on Canada and Mexico this year but the U.S.-China trade war escalated, as the U.S. increased tariffs on Chinese imports from 10% to 25% and announced plans to expand tariffs to all $540 billion of imported goods from China. In response, the Chinese government instituted a raft of further tariffs on American products.

Wall Street has responded to the prolonged conflict with selloffs and significant drops to the Dow, Nasdaq and S&P 500. And in May, the world’s biggest retailer, Walmart, announced that it expected the tariffs would result in sharp price increases for its retail customers.
Port, farm effects

In Virginia, the fallout from the trade war with China has affected a variety of industries, from soybean and tobacco farmers to beverage distributors, breweries, auto manufacturers, lumber producers and commercial builders.

“China is an important trading partner for Virginia,” says Barry DuVal, president and CEO of the Virginia Chamber of Commerce. “Obviously we are concerned about the impact on Virginia business and therefore on Virginia employers and consumers.”

China is the Port of Virginia’s largest trading partner, representing 16.2% of the port’s overall volume. Last year, Virginians imported more goods from China than from any other nation, accounting for 26% of total imports.

Port spokesman Joe Harris says it estimates that up to nearly 5% of its overall cargo traffic could potentially be affected by the tariffs. Nonetheless, it is difficult to predict what form that impact could take, he says. In order to hedge any potential damage, the port is seeking to diversify its cargo mix through strategies such as marketing itself as a loading and logistics center for the offshore wind energy industry and developing its military cargo business.

Virginia’s agribusiness exports to China “decreased dramatically” from 2017 to 2018, falling from $691 million to $235 million “largely as a result of trade tensions and initial retaliatory tariffs imposed a year ago,” says Jewel H. Bronaugh, commissioner of the Virginia Department of Agriculture and Consumer Services.

China went from buying $21 million in soybeans from Virginia in the third quarter of 2017 to no purchases at all during the same time last year. Similarly, China, which has been a major purchaser of Virginia tobacco, “did not extend contracts to U.S. growers for the 2019 season due to the Chinese tariffs on U.S. tobacco,” Bronaugh says.

“This year with tobacco, you don’t have to worry about getting a lower price [from China]. You’re not going to grow it because the market’s not there. It’s gone,” says Tony Banks, senior assistant director for the Virginia Farm Bureau Federation’s Agriculture Development and Innovation Department. 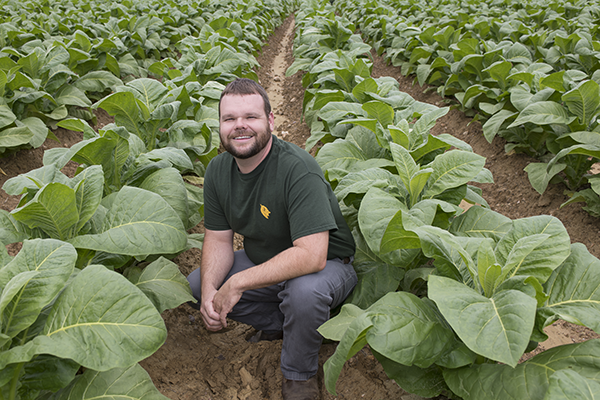 Chinese tobacco-leaf buyers have migrated to Brazil and Zimbabwe, says Mecklenburg County tobacco farmer Jay Jennings, who is president of the Virginia Tobacco Growers Association. Because of the U.S.-Chinese trade conflict and other factors such as declining tobacco use and competition from electronic vaping devices, tobacco production and prices are down significantly this year, he says, and leaf purchasers are sitting on unsold inventory.
Many Virginia soybean and tobacco farmers are diversifying into new crops, such as industrial hemp, Boyd and Jennings say.

Last year, TMEIC applied for a waiver when the Trump administration instituted 10% tariffs on critical components it imported from its parent company’s factories in China. That waiver was rejected because the parent company had an additional source for the components at its factories in Japan and India, so TMEIC shifted the purchase of those items to India.

Nonetheless, Michael Cooper, TMEIC’s marketing director, says that the company has been told that a 25% tariff likely will be applied to a variety of other necessary manufacturing components and devices that the company purchases from third-party vendors in China.

“Our margins are tight to begin with. We’re in a very competitive environment,” says Cooper. The tariffs “will have a direct negative impact on our manufacturing costs and result in either passing on cost increases to our customers and/or reduced margins on our finished products.”

An additional problem and “unintended consequence” of the conflict, says Cooper, who speaks Mandarin and has been doing business in China for decades, is that being an American company is now a negative in China, unlike in the past, when that status had cachet there.

Kaine and Warner agree that the United States needs to get tougher on unfair China trade practices. Nonetheless, they disagree with the Trump administration’s approach to the problem, which alienates U.S. allies.

For starters, pulling out of the Trans-Pacific Partnership trade agreement earlier this year “strengthened China’s hand,” Kaine says, because China didn’t want the United States to have a preferential trade relationship with TPP nations such as Japan.

Furthermore, the senators say, even though the Trump administration lifted its 14-month-long tariffs on steel and aluminum imports from Canada and Mexico in May, the president’s America-first rhetoric and policies have antagonized longtime allies, and that also aids China.

“Their willingness to partner with us against China is dramatically reduced because the president picked a fight with our allies,” Kaine says.

“For a guy who’s supposed to be such a great negotiator, it would not be the negotiating style that I’ve used or I think most successful businesspeople have used,” Warner says.

He adds that the U.S. now faces more difficulty getting Canada and Mexico to stand with it on legitimate concerns, such as the Trump administration’s recent decision to block foreign telecommunications and technology transactions that could pose a threat to national security. Analysts say the move was prompted by fears that equipment from Chinese telecom manufacturers such as Huawei would enable the Chinese government to spy on America’s next-generation 5G wireless communications networks.

DuVal, the Virginia Chamber president, commends the Trump administration for “recognizing the bad behavior of China.” But DuVal also says that the president’s strategy, negotiating directly with China while announcing trade policies via Twitter, represent a drastic departure from traditional trade tactics, in which diplomats quietly hammered out agreements behind the scenes.

“Because it’s a top-down process, the business community doesn’t have the certainty that [it] likes to have and therefore can plan on. … And therefore you see the volatility, for example, in the stock market,” says DuVal. “It’s still a period of uncertainty … [but] we’re not suggesting it’s the wrong approach.” 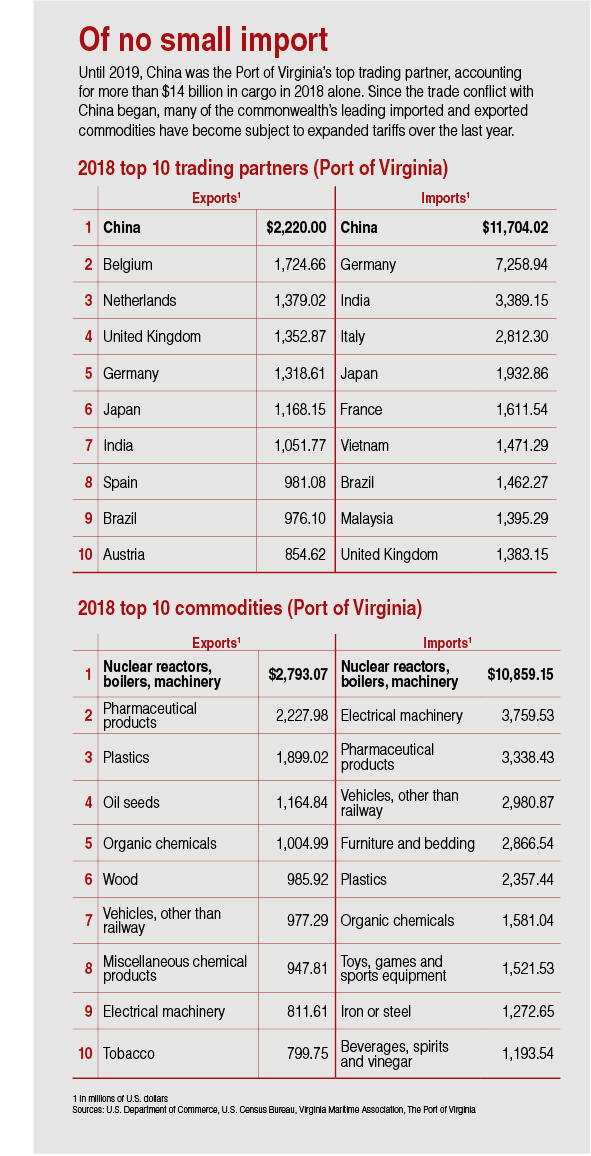 And going into summer, there was no sign of when the trade conflict would abate or what the long-term impact could be.

“There’s no winners in a trade war,” says Paul Grossman, vice president of International Trade for the Virginia Economic Development Partnership. “It has a very disruptive effect on business.”

Grossman warns that, regardless of when the conflict de-escalates, American industries face a “long-term hangover effect” from the trade war.  U.S. industries will have lost significant market share because Chinese industries are finding other, less expensive alternatives to American goods in response to the tariffs.

“If we cannot quickly resolve the situation of escalating tariffs, China will continue to replace Virginia imports with products from other countries that can enter at a lower tariff rate. This will negate years of business negotiations and relationship building with importers in China,” says Bronaugh, the state agriculture commissioner. “Chinese customers are adapting to the new reality of essentially not being able to purchase from the U.S. and are forging relationships with other producers.”

In their strategic considerations, the Chinese take a much longer-term view than Americans, says TMEIC’s Cooper. If the U.S. government negotiates from a standpoint of believing “that the Chinese are going to cave on anything that they consider to be of consequence … [then the trade conflict] will never end,” Cooper says. “My anticipation is that there are going to be some wounds that have been opened in this fight that are not going to close. And the long-term or even medium-term ramifications for U.S. companies is not good.”