UPDATED JULY 2 | Suffolk-based TowneBank and Children’s Hospital of the King’s Daughters (CHKD) have jointly purchased the 22-story Norfolk Southern Tower in downtown Norfolk from the Fortune 500 railroad corporation, which is in the process of migrating its corporate headquarters to Atlanta.

The building sold for $30 million, according to city of Norfolk documentation — although property records indicate that (at its most recent assessment) the building at 3 Commercial Place was valued at more than $55 million. The sales price was even lower than what Norfolk Southern had purchased the tower for in 1998, at $32.8 million.

“This was a complex transaction with multiple parties and several features, which includes Norfolk Southern renting more than half the building back from the purchasers,” says a Norfolk Southern statement released at the time of the sale, when the sales price had not been revealed. “The transaction price was a negotiated component of that, and we’re not releasing that information at this time.”

The deal for the 388,308-square-foot building closed on June 23, according to Cushman & Wakefield | Thalhimer, who represented Norfolk Southern in the transaction. TowneBank and CHKD went in together on the deal as McKinnon Tower LLC.

TowneBank and CHKD haven’t announced a new name for the building yet, but TowneBank’s branding will go at the top of the building,  says TowneBank Chairman G. Robert Aston Jr. “CHKD graciously allowed us to do that,” Aston says. “There will be other CHKD signage. We certainly want to continue to honor the heritage of McKinnon and what he meant to Norfolk. … We will certainly find some way to appropriately do that. I’m assuming that it will become known as the TowneBank Tower at the end of the day.”

In April, TowneBank announced it was reaching an agreement to purchase a nearby downtown Norfolk parking garage for $8.5 million. Under the transaction announced Wednesday, the bank and the children’s hospital have agreed to purchase the 744-space garage (including general, monthly and restricted parking) at 520 E. Main St. from the city of Norfolk and lease 298 spaces at three additional city garages.

Nearly 900 people will occupy the building, including approximately 475 CHKD employees and 400 TowneBank employees, according to a statement from Norfolk Mayor Kenneth Cooper Alexander.

“TowneBank and CHKD are both respected corporate citizens and assets to our community,” Alexander said in a statement.  “Their significant investment reinforces Norfolk’s downtown as the urban employment hub of the region.”

TowneBank’s corporate office will remain in Suffolk, but the Norfolk Southern Tower will house the headquarters of its Towne Financial Services division, which includes TowneBank Mortgage, Towne Insurance and Towne Benefits.

“We have been looking for a way to bring the Towne Financial Services executives and operations teams together under one roof and had been exploring numerous locations throughout the region,” Aston said in a statement. “In 2018, when Norfolk Southern announced its plans to relocate, the opportunity to purchase their iconic building was too good to pass up.”

“This opportunity allows us to move office functions out of our on-campus clinical buildings so that we can repurpose those spaces to better serve the children of our community,” CHKD President and CEO Jim Dahling said in a statement.  “The decision to jointly own this building represents the most time-sensitive and cost-effective solution to critical space shortages for both our patients and our staff, including expediting our ability to bring much-needed mental health services to children in advance of the opening of our new mental health hospital and outpatient services tower in 2022.”

As part of the transaction, TowneBank will be donating approximately $1.3 million to CHKD to support the ongoing capital campaign for the mental health hospital.

As one of the preeminent buildings in downtown Norfolk, the Class A office building represents almost 10% of the total Class A and B downtown office space, according to Cushman & Wakefield | Thalhimer. Constructed in 1989, the building was purchased by Norfolk Southern Tower LLC in 1998 for $32.8 million, according to property records.

With total assets of $12.82 billion as of March 31, TowneBank is one of the largest banks headquartered in Virginia. CHKD is the only freestanding children’s hospital in the state.

Lofts at Front Street in Norfolk will include 258 units and internal parking garage. 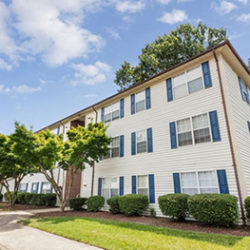