‘Time is the enemy’

Schools are trying to help transfer students graduate on time

After working several years as an orthodontic assistant, Sara Falzone was ready to advance her education and change her career.

In 2012, then living in Hampton Roads, she started classes at Thomas Nelson Community College to study business. She’d previously taken some courses at Rappahannock Community College and earned a dental assistant certification from a technical center in Virginia Beach.

Falzone then decided she wanted to pursue a bachelor’s degree.

“As I grew as a person I realized that I was not only capable of more, but I deserved more,” says Falzone, now 27. “That was what sparked me wanting to go back to school was realizing this potential that I had.”

Equipped with a bundle of community college credits, she was eager to transfer to Virginia Commonwealth University.

The timing seemed right. She and her husband were moving to Richmond so that he could attend VCU. She had discovered an interest in marketing, and the university offered a wide array of classes in that field.

Nonetheless, an hour on the phone with an adviser at VCU’s Transfer Center changed her plans.

The adviser encouraged Falzone to complete her associate degree at J. Sargeant Reynolds Community College before transferring. That move would save her money and provide for a smoother transition, the woman advised.

So Falzone started classes at a third community college, taking a year to complete her degree requirements. “It was really helpful because I could transfer in as a junior,” says Falzone. “There are a lot of classes you can lump together with your associate degree so you don’t have to take some of the earlier requirements.”

Using scholarships and grants and her own contributions, Falzone left community college with just $5,000 in student loans and expects to have an additional $25,000 of debt after graduating from VCU.

Virginia’s higher education leaders want to reach more community college students like Falzone, encouraging those wanting to transfer to four-year universities to earn associate degrees first. Right now, only about one-third of these transfer students do that.

Studies show students who transfer with associate degrees can save money and are more likely to graduate on time.

“Time is an enemy when students pursue postsecondary credentials, and the longer it takes them to reach the finish line, the less likely they are to do so,” says Jeff Kraus, assistant vice chancellor for public relations for the Virginia Community College System (VCCS). “So, for the sake of their pocketbooks and their student loan debt and for the sake of our institutions, we want everyone moving as efficiently as possible to the finish line.”

Transfer agreements
A new study from the State Council of Higher Education for Virginia (SCHEV) supports the community college system’s concerns. Some Virginia students are taking an unnecessarily long and expensive path to earn four-year degrees.

Virginia, however, has been trying to smooth the transition between two-year and four-year schools, establishing a more affordable way to earn a bachelor’s degree.

The result was the creation of Guaranteed Admissions Agreements (GAAs) between universities and community colleges.

The VCCS now has 27 GAAs between Virginia’s two-year and four-year institutions. The agreements outline specific course requirements and GPAs students must achieve to receive guaranteed transfers.
GAAs were heralded as a way to save almost one-third the cost of earning a bachelor’s degree. In the ideal “2+2” scenario, a student would spend two years at a community college and then two years at a four-year school.

The potential savings are substantial.

The 2+2 scenario could save students an average of $14,000 in tuition depending on which institution they transfer to, according to the SCHEV study. That could increase to savings of more than $18,000 using the Two-Year College Transfer Grant program, which provides additional aid for transfer students demonstrating financial need.

Few students, however, are using the 2+2 pathway — and many are taking significantly longer than two years to graduate once they have transferred, according to SCHEV. “We know most students don’t do it on a two-plus-two scenario, and we know that they lose a tremendous economics savings by not doing that, and yet they still do it,” says Joe DeFilippo, SCHEV’s director of academic affairs and planning.

The SCHEV study found that 18 percent of students who transferred with an associate degree during the 2009-2010 school year were taking an additional four years to complete their bachelor’s degree.

For students graduating community college without a degree but transferring with 16 to 30 credits, that number rose to 23 percent, with another 8 percent taking five years to graduate.

SCHEV is considering researching the issue further, potentially with additional studies. “My biggest interest would be to try to identify the factors that we could get a larger number of students to take advantage of the savings that are available to them, because those savings are very, very substantial,” says DeFilippo.

Each year about 22,000 students transfer for the first time from Virginia’s community colleges to Virginia’s public and private four-year schools and out-of-state institutions. About one-third of those transfer students have completed an associate’s degree.

So VCCS, which oversees Virginia’s 23 community colleges, is working with its schools to encourage students to complete their associate degrees before transferring and use the GAAs if possible.

“We have data showing they’re more successful once they get to the university,” Kraus says of students who use GAAs and complete their associate degrees before transferring. “We know that more of their credits transfer properly … and we know that in building a foundation of success at the community college they are stronger students and succeed better once they arrive at the university.

“There are some that chose to move earlier, and there’s a price they are paying for that. And it’s an unnecessary price.”

Twenty percent of a community college’s funding from the state is now determined by outcome measures. Among other measures, these include degree completion, associate degrees awarded before students transfer and the completion of a bachelor’s degree requirements by former VCCS students.

“We have a lot of students who transfer prior to completion of any sort of certificate or degree,” says Catherine Finnegan, assistant vice chancellor for institutional effectiveness with the VCCS. “What we find is those students probably have an idea that they want a bachelor’s degree, but they might not be clear on what that goal is, and we also find they don’t succeed in completing a bachelor’s degree in a level that we think is acceptable.”

For the past year, the community colleges have been creating plans to improve degree and credentialing completion. The goals include better career exploration for students at the beginning or their academic careers, better advising and better technology to do both.

This year the budget passed by the General Assembly provided additional funding for the new standards and for upgrading technology to help students explore their career plans earlier. “We want them to understand what the job opportunities are, what the costs of the lifestyle they want are and what sort of degree or credential it would take,” says Finnegan. “Knowing where you want to end up helps in that planning, and it also helps your advisers to provide you with better information.”

Virginia’s transfer magnets
For their part, some of Virginia’s four-year colleges have made it a major part of their mission to attract transfer students. Together, George Mason University, Old Dominion University and VCU attract two-thirds of all students transferring from two- to four-year public institutions. 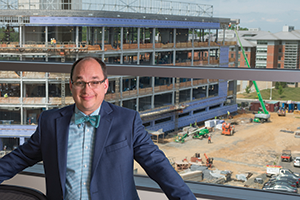 “There is a strong relationship between the Virginia Community College System and Mason,” says David Burge, vice president for enrollment management at GMU. “We want transfer students here, and I don’t believe that message is universal [among all Virginia colleges].”

George Mason University accepts the most transfer students of any of Virginia’s public institutions — more than 3,000 a year — making up about 27 percent of those transferring from a two-year to a four-year public school, according to SCHEV research.

Schools like Mason, VCU and ODU have recruitment and advising services for transfer students to help students before and after the transition. The universities are encouraging their students to complete school as efficiently as possible, while recognizing that transfer students often lead very different lives than students starting their four-year degree right out of high school. “They often have part-time jobs, or they have a family, and they need to live at home or in the apartment they have,” says Seth Sykes, an associate vice provost for the Division of Strategic Enrollment Management at VCU.

In Northern Virginia, George Mason, Northern Virginia Community College and eight K-12 public school systems work together in a program called Pathway to Baccalaureate. The nationally recognized program helps students from challenging backgrounds transition from high school to community college and then on to complete a degree at Mason.

In addition to recruiting transfer students, ODU holds socials such as Transfer Tuesdays to connect transfer students, prospective students and professors. “These aren’t your typical students,” says Sandy Waters, ODU’s executive director for advising and transfer programs. “Our average transfer student is 28. They are typically commuter students who are working or raising a family.”

The university, which takes about 20 percent of the state’s transfer students each year, has established a number of ways to help transfer students, including offering online classes and a letter of intent that allows students to lock in ODU’s current requirements to ensure their credits transfer.

All three schools are launching campaigns to encourage all students — including transfer students — to take 15 credits a year to help them graduate on time.

“I would say the biggest benefit to getting out in four years is financial,” says Sybil Halloran, also an associate vice provost of VCU’s Division of Strategic Enrollment Management. “The longer you’re in school, you’re not only paying for that school, but you’re not in a full-time job. You could be taking out additional loans. The longer you’re in school, the more money you’re spending.”

For her own path, Falzone is taking VCU’s advice — again — to heart.

Even though she still works 30 hours a week as a digital marketing assistant at a car dealership in Henrico County, she’s on track to graduate next May, two years after she transferred to VCU.

To manage competing activities, she’s using night classes and summer and winter sessions to earn required credits. In addition to the time spent at work and school, she’s also joined organizations, including VCU’s Business Student Ambassadors and the VCU chapter of the American Marketing Association, where she serves as vice president.

Falzone admits that the transition to VCU wasn’t easy — the large lecture classes and testing style took some adjustment. She also faces a bit of a generation gap with younger students.