(Scroll to the bottom for a gallery of images from the 2017 Virginia Business Best Places to Work awards luncheon.)

In previous generations, work was everything. For some, it still is.

Yet many in a rising generation of workers say they want more. They want flexible schedules that permit time to be with their families or to engage in community projects. In other words, time for a life beyond the workplace.

A 2014 Heartland Monitor Poll — sponsored by Allstate Insurance, The National Journal and The Atlantic magazine — found that, if given the choice, two-thirds of Americans would choose “more flexibility and shorter hours … but less pay.”

In that same poll, 77 percent of millennials — who have supplanted baby boomers as the largest living generation — say it’s important to have “the flexibility to work at different hours.”

The pursuit of a balance between work and life is clearly a priority — or is rapidly becoming one — among today’s workers.

And that trend is reflected in the number of companies that offer flex time and openly acknowledge the desire of their employees to have more balance in their lives.

Other companies give a nod to work-life balance with 35-hour workweeks. They include the Consumer Technology Association and Healthcare Distribution Alliance, both based in Arlington.

Still others offer telecommuting options and shortened workweeks during the summer, such as Vaco in Richmond that releases workers at noon on Fridays during summer hours.

This is the seventh year that Virginia Business has compiled the Best Places to Work list in cooperation with the Best Companies Group, a Pennsylvania-based firm.

In Martinsville, good jobs are hard to find a decade after the collapse of the textile and furniture industries. The region’s unemployment rate typically trends higher than the state or national average.

In October, for example, the unemployment rate in Martinsville stood at 6.7 percent, compared with a state average of 4.2 percent and a national average of 4.6 percent.


American Global Logistics, a specialist in global and domestic shipping services, is one of the bright spots in Martinsville’s economy.  It is ranked No. 13 on the Small Employers list. Jon Norman, the company’s manager, says the company is committed to creating a family atmosphere in a business that is fast-paced and often stressful.

“What we’ve discovered is that it works best when you provide employees with a flexible schedule,” he says. “It helps them work out child care [issues] and doctors’ appointments. When we give our employees an ability to work from home, there’s a palpable increase in morale. It also makes them more accountable for what they do.”

Among other duties, the company’s 70-plus workers in Martinsville help coordinate shipping from factories in Asia and importers in the U.S.

Norman says many of his employees have come from jobs at local factories that have closed. These workers are driven to improve themselves and help their families. Some have earned degrees at local community colleges, and others have completed technical training courses to improve their skills.

Norman says the company puts a lot of trust in its employees and gives them a lot of responsibility.

“We’re looking for self-starters with critical thinking [skills]. The main thing is having an attitude that you can tackle anything without being overwhelmed,” Norman says.  “No one is micromanaged … everybody owns their own work. They take pride in what they do,” he says.

There are no set vacation days for employees and no time sheets. When someone needs a day off, they can take it as long as their accounts are in order, Norman says.

“This is a small town. We know people have their needs,” Norman says, explaining the reason for the flex-time arrangement and the other accommodations the company has made.  “It’s been super successful,” he says.

Time with his sons
Bowen Richwine, director of business development at Corps Solutions in Stafford County (fourth on the Midsize Employer list), appreciates the fact the company allows its employees to tailor their work hours to fit their lives. Richwine spent 20 years in the Marines, retiring as a lieutenant colonel.

Long periods of time in hostile territory were frequent. And they took their toll on his family, especially his relationship with his three sons, now ages 6, 11 and 12. “When I was in Iraq, I missed whole years of their lives,” says Richwine.

At Corps Solutions, which provides training and support for the Marine Corps and other national security stakeholders, Richwine says he found a “family-friendly” employer.

For the first time, he was able to have breakfast with his sons, coach their sports teams or watch them play. Work flexibility also has enabled Richwine to pursue a doctorate in education.

Trust and accountability have a big role in making flexible work hours successful, Richwine says.  “We play by big-boy rules,” he adds.

Corps Solutions has about 70 employees in Virginia and 190 nationwide. 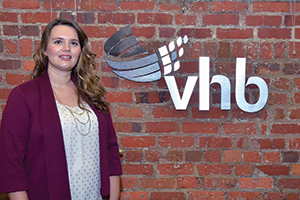 Faith Driggers is a human resources manager at VHB (No. 18 among Large Employers), an engineering firm based in Watertown, Mass. It has four offices in Virginia: Richmond, Tysons, Virginia Beach and Williamsburg.

Driggers says that, for members of the millennial generation, work is a big part of who they are, but it is not everything.

She says that for her father, a baby boomer, work was engrossing. Her dad, she says, would work long hours at the office and then spend more hours at home working into the night.  “He’s sometimes surprised by the flexibility I have,” she says.

That flexibility stems from VHB’s philosophy and core values. “We believe in achieving a balance between professional and personal lives, and we want to work with our employees to see what that looks like,” Driggers says.

For some employees, being able to arrive later in the morning enables them to take a child to school. Others are caregivers for elderly parents. They want to come in and leave earlier to relieve another caregiver. 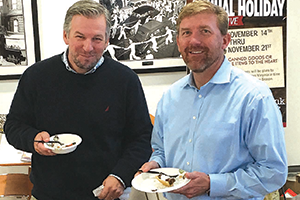 When Perry Frazer went to work 20 years ago for the commercial real estate firm CBRE (No. 6 on the Large Employers list), one rule was consistent. “We were encouraged to come in early and leave late,” says Frazer, managing director of the firm’s Hampton Roads office. Time with family often suffered.

With the communications offered by smart phones and other devices, Frazer says, you can work just as many hours — or maybe more — outside the office, while still being able to maintain a family life.
The culture has changed, he says, and younger employees support that change. “We let our employees figure out on their own how to get the work done and where they need to be,” Frazer says.

To give the workplace a family vibe, CBRE provides a light breakfast for employees and recently staged a pie-baking/pie tasting competition.

Who’s online?
How do you implement work-life balance at a company where the expectation is that you’re on call 24/7?

That’s one of the challenges at the Association Resource Group (ARG) in McLean, a technology consulting firm with 55 employees (No. 59 among Small Employers). Everyone at the company receives a free iPhone and iPad to keep them connected. 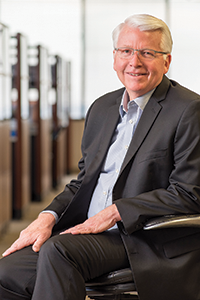 “We’re always on,” says CEO Greg Praske. “The expectations have increased, and the pace is extraordinary. If not properly managed, a work day will have no beginning and no end.”

One way the company manages is through technology that shows which employees are online.

With that information, if a client calls with an urgent request after hours, a manager doesn’t have to call a mother or father who is offline, struggling with a 2-year-old with a bad cold. Instead, an employee who is already online can respond. “It helps us set boundaries,” says Erica Lord, the company’s director of business development.

ARG gives employees the option of working from home on Fridays.

Praske believes that in commuter-challenged areas such as Northern Virginia an out-of-office workforce might be increasingly common. “We’re rapidly seeing that being anchored in an office is not a requirement for being productive,” he says. “Companies are moving their servers out of the back room to the cloud. You will have access anywhere.”

One of the ways that companies help employees achieve work-life balance is to involve them in community activities.

One effort at ARG originated from an experience Praske had at church. On one Sunday, he was handed a $20 bill when he walked in the church door. “I said, ‘What’s going on here?’” Praske recalls.  Church members were asked to take the $20 and perform a good deed.

On several occasions Praske has given employees $100 to spend on good deeds. In honor of the company’s 25th anniversary, employees received $250 to perform random acts of kindness. “We’ve had these amazing stories,” Praske says.

One employee bought jump ropes and chalk and gave them to children in a needy neighborhood. Then, she took her own $100 and bought more toys.

Another employee went to a transit station and purchased free fare cards for tourists.

“The stories are unbelievable,” Praske says, explaining that employees are asked to write down how their acts of kindness affected others.

“Reading each other’s stories inspires us and challenges us,” Praske says. And for a few moments, it gives employees a chance to reflect on the fact that there’s more to life than work.


Below is a gallery of photos from the 2017 Virginia Business Best Places to Work awards Luncheon held February 2nd at the Williamsburg Lodge.  Please contact Art Director, Adrienne Watson at [email protected] with the image number if you would like a copy of your photo for your company press release.